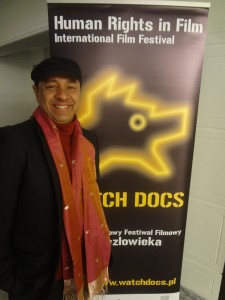 From the 21st of November to the 16th of December, Europe got a glimpse into the LGBT world of India. Queer India – Sridhar Rangayan’s Europe tour- travelled to Brighton, London, Dublin, Stockholm and Warsaw. This tour showcased many of his award-winning films. Sridhar, who is an IIT graduate hailing from Mandya, Karnataka screened his films like Gulabi Aaina about drag queens, that was banned by the censor board in 2003 to Yours Emotionally; which is about a British gay man falling in love with a man from an Indian town who is bisexual; to 68 Pages which raises the issue of AIDS Awareness.

It was during Rangayan’s several conferences on film making and LGBT rights in Europe that many universities and organizations expressed interest in screening his films as well as holding talks and debates. The Queer India European Tour was thus born out of this, as a way to create discussion over LGBT issues in India.

“The tour is mainly about cinema as a means of raising discussions about LGBT lives and issues in contemporary India,” says Rangayan. His films that are inspired by people in real life each offer a glimpse from a different side, about a different issue concerning LGBT India.

He is also combining the film screenings with talks and discussions about the LGBT in India. The Queer India European Tour took place in collaboration with University of Sussex, University of Westminster, University of Dublin, Watch Docs Human Rights Film Festival to name a few.

“Bollywood cinema has corrupted and stereotyped LGBT characters and made it unpalatable to most people. But the new Indian queer cinema is sensitive, subtle and offers a realistic portrayal that surely will help in building rational and positive attitudes towards the LGBT community. It is a thrust in the right direction, with the right attitude,” he says.

So far, the festival has received tremendous support, as his films are able to break through the barriers of background and culture and appeal to universal sensibilities. “Imagine a houseful audience at the large Old Cinema in London on a rainy winter day. That surely shows a growing interest and appreciation of Indian queer cinema and culture,” he says. “I only wish these were ticketed events so that I could take back some money for the young filmmakers.”

The festival also showed the trailer for Breaking Free, Rangayan’s upcoming documentary feature film. He has also been travelling to smaller cities and towns in India, which are also opening up to homosexuality. “India is too vast and diverse a country for the changes to be homogenous across India, but there is no going back anymore. Queer India is definitely out of the closet,” he says.