Living in a society that shies away from sex and sexuality is challenging, to say the least. Being a homosexual woman complicates things even further. Being a lesbian herself, Rishika* recognized how difficult dating and romance can be for gay women. She, along with her childhood best friend Anamika*, founded Her Tryst, an online dating group on Facebook for LBTQ+ individuals. “Breaking the barriers is tough and we can’t do it alone, so with Her Tryst, we are doing it together,” says Rishika. She is a journalism graduate, and Anamika is an engineer. The platform functions as a Facebook community, where members are added upon request. It includes the group where members share their introductions, and also has a group chat.

“Our society already makes it difficult for women to exist, so let’s not even get started on how scandalous it would be in a regular household, for her to embrace her sexuality. Women find it difficult to open up for the simple reason that they don’t feel safe. Homophobia is so deeply rooted in our society that homosexuality is either a joke or a phase – and this intersection of homophobia with patriarchy makes it worse for women.”

Online dating has in some ways, made dating more accessible to the community. But there are many risks involved with it. “While you can never be sure if the people you are interacting with are the same people behind the screen, there’s always a lingering fear of being outed in a community that only expects us to love the other gender. Women and others in the LBTQ+ community get objectified by perverts and are expected to cater to their lesbian fantasies. It’s gone as far as being offered sex as a measure to ‘cure’ their homosexual tendencies. The misconceptions that people have about the community, especially about queer women, are the root of all problems,” says Rishika.

There are many larger app-based platforms like Tinder, Her, and Hinge, which have ventured into the arena of same-sex dating. While they use mobile numbers to prevent multiple profiles, this does not solve the problem of impersonation and identity theft. From their personal observations, Rishika and Anamika found around two-thirds of online profiles to be fake.

However, Her Tryst has two distinguishing features that separate it from the rest. Once you make a request for joining, profiles go through a three-step verification process. The other feature is a group chat, to make users feel welcome, and is especially targeted to include those who feel alienated from their friends and family.

Right now, the page only has Rishika and Anamika and a few other friends who have volunteered, as administrators for the page. Together, they have created a small but safe and secure community for LBTQ+ women. Currently they’re only on Facebook, but they have plans to launch an app in the future as they scale up. While there are members coming from different backgrounds, most are in their early 20s. Reaching out to the older generation has been a little difficult, since they are not as active on social media. They make match recommendations based on shared interests, but members are free to talk and form their own connections. Her Tryst has brought seven couples together so far. 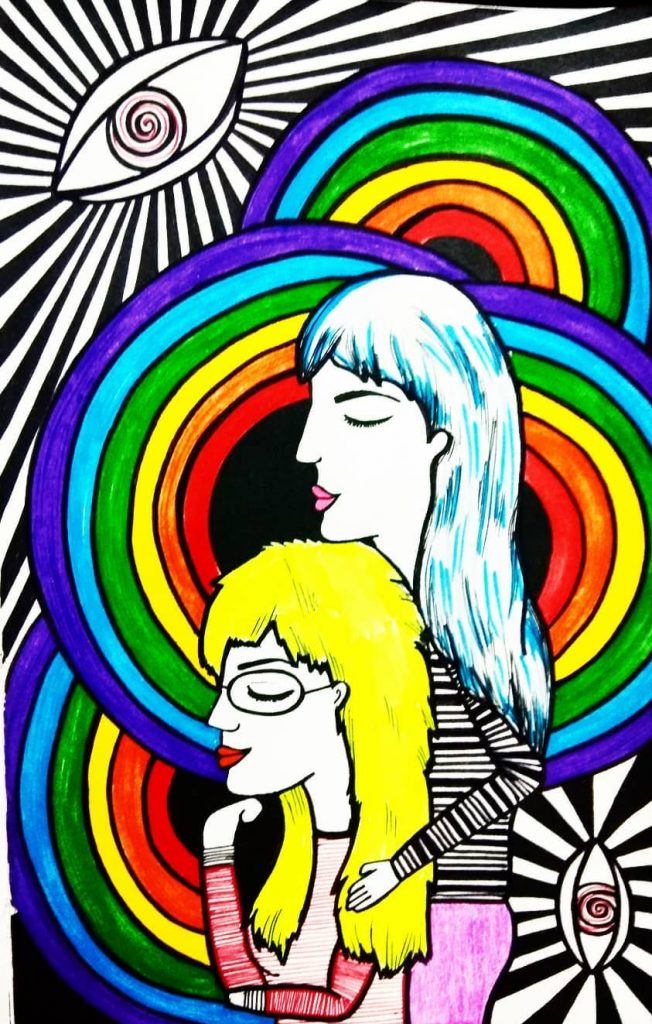 One such couple is U and S, who met on Her Tryst. S, who had never tried online dating before, tried the group after a breakup on a friend’s recommendation. This is where she ended up finding her girlfriend U, and also made a few friends. “Everyone in the group posted long introductions about themselves, but U had posted a short introduction, which really got my attention. I just wanted to know more about her and talk to her. However I didn’t do anything about it. I remember thinking to myself, ‘she’s too cute to talk to you… just get over it. Don’t even try.’ I just went to sleep that night and woke up to a message request from her the next day. We started talking on FB messenger and soon exchanged numbers. I was comfortable around her, and gradually I fell in love with her. It’s been almost 5 months since we got together. I have never been so happy and confident in life. I feel very lucky to have her and fortunate enough to have found her.”

U said, “After we spoke, I really started liking her, so after 11 days, I asked her out and she said yes! Till date, it has been the happiest day for me. She has been more than just a girlfriend to me. She has been a saviour, a friend, a guide, and every possible thing. I am madly in love with her.”

For those looking for a date, romance, or just a group of similar people from the queer community, Her Tryst provides an open and safe space. The scanning of member profiles ensures that only genuine people join. Her Tryst provides a more personalised group of people, rather than large scale dating apps. It also has the added bonus where you can connect with similar people on the group chat. And if you’re lucky, you may find a love story like U and S.