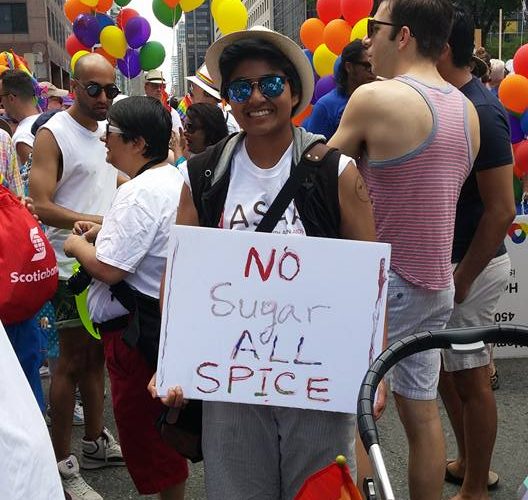 I have to be honest, although I teach healthy relationships to Queer South Asians in Toronto for a living, learning about boundaries and effective communication was a long and tedious journey for me. I always had a history of friends telling me that I was way more tolerant of unacceptable behaviours than the average person. For the longest time, I thought that maybe it was just a part of my personality; I do smile a lot and generally have a very happy-go-lucky demeanor. However, it always seemed to me like most people had this missing puzzle piece that I didn’t. I had more books on self-help than can be found on a therapist’s book shelf, and yet I always felt that there might have been a deeper, more ingrained reason behind my understanding of relationships and communication in relation to the context of the queer western world.

Till one day it all dawned upon me.

I was at work when I received a text from my father telling me that he was visiting Toronto, and he wanted to see me for dinner. It has been a year since he told me to leave the house after I told him I wanted to pursue my gender transition. Upon receiving his text, I laid my head on my desk, let out a deep “sigh”, and started to lightly bang my head against it in frustration.

“What’s wrong?” my coworker asked while looking over the top of her computer screen with concern.

I told her that my evening would involve dodging uncomfortable questions such as “When are you getting married?” “How much money do you make?” and other deeply personal invasive details, which I would have no choice but answering, unless I deviated the topic to how bland the restaurant food was compared to home cooking.

“Have you ever thought of treating your parents like you treat your friends?” she said. “I know it is hard, since in our culture boundaries are not well defined. Our families always know what we are up to and where we are. However, ask yourself – would I let my friend comment on my relationship status? Would I let my friends call me late at night without my permission? Perhaps not. When I started setting boundaries with my family – like I would with good friends who wish the best for me – my relationship with them improved.”

After that conversation, I did not end up treating my father like a friend of course, but it did give me a lot to think about. She was right; my cultural upbringing really influenced how I navigated relationships with those around me, especially in terms of boundaries, power balance, and communication. These dynamics often came in conflict with North American expectations, making messaging around sex and relationships often difficult and confusing to navigate – not only for me but for many queer South Asian folks I worked with.

Growing up in a house full of four children and an extended family, personal space and boundaries were not formally defined for me. It was natural to have my father or mother to barge into my room at 6 am in the morning, telling me to wake up or come downstairs to eat food. If I ever dared to disagree or say no, I was being disrespectful to my elders or “could leave the house” as they would say.

From a young age, I was told to be polite, smile, serve tea to guests, be a good student, recite religious scriptures from top of my head, and to never speak back. I was taught to let my parents and society decide what is right for me. I learned to accept nosy and offensive questions from family members such as “How did you gain weight?”, “How did you get so dark?”, “When are you getting married?”, with a polite smile and silence. Saying no to family members who would forcefully put extra food on my plate was already difficult, so dodging these questions was even harder.

However, now when I found myself in Canada’s queer scenes, I was not sure how to handle invasive questions. At times I was asked questions like “What is in your pants?”, “How do you have sex?” or the most bizarre one yet – “Tell me about your history of abuse being a trans person of colour?”. No matter how annoying these questions were, I avoided them with the same polite smile I have learned all these years to avoid conflict.

It took years of unlearning that I had the right to my own privacy and choice of sharing my personal information or not. Many of my North American friends told me to just give those people a piece of my mind, but I felt like it did not align with my personality or my cultural upbringing. Eventually, I learned to set boundaries in a polite manner, which sometimes looked like simply walking away or asking people to change the subject. Now I apply the same skill set to politely set boundaries with family as well in the same manner.

However, setting boundaries became a bit more difficult when it came to romantic relationships.

With the lack of conversation around dating or sex in our cultures, I found myself not being able to distinguish between health and unhealthy relationships.

When one of my partners did not allow me to go out, called me every five minutes to possessively check where I am or who I am talking to, or asked me why I have gained weight, I did not view their over protectiveness as a sign of an unhealthy relationship, since I was not exactly sure what to expect from a relationship in a first place. Through time and experience, I had to learn on my own that relationships were built on trust and mutual sense of respect. I also learned to constantly check in with my own body and my gut feelings to know where to draw the line, as well as let go of my shame around queerness and not fulfilling my cultural expectations.

I was never the best person at reaching out for my own needs, since I was born into a culture where collectivism is chosen over individualism. In my culture, we do not focus on our personal needs, and instead care for our families and our communities unconditionally. We focus so much on our societal image, that topics such as mental health, disability, sex, and financial problems are swept under the rug and are never talked about. For example, in my house, my brother’s mental illness was never brought up at table talks. Several years later, when he lost his life to it, we continued to call it an “accident” and never mentioned it again. I eventually grew to believe that talking about my struggles was shameful and made people think less of me and my family. I chose to not reach out to people.

It took a while for me to learn to reach out to others, and at times I still struggle at it. However, through incremental disclosure, I learned that these topics could be talked about in safe and confidential spaces with trusted friends, without the fear of being judged or looked down upon. In fact, often reaching out to the right people, can bring us closer to them, reduce the shame, and help to get a different perspective on situations. Reaching out can also reduce the stigma and the taboo around these subjects, and help others see that they are not the only ones in dealing with their struggles. 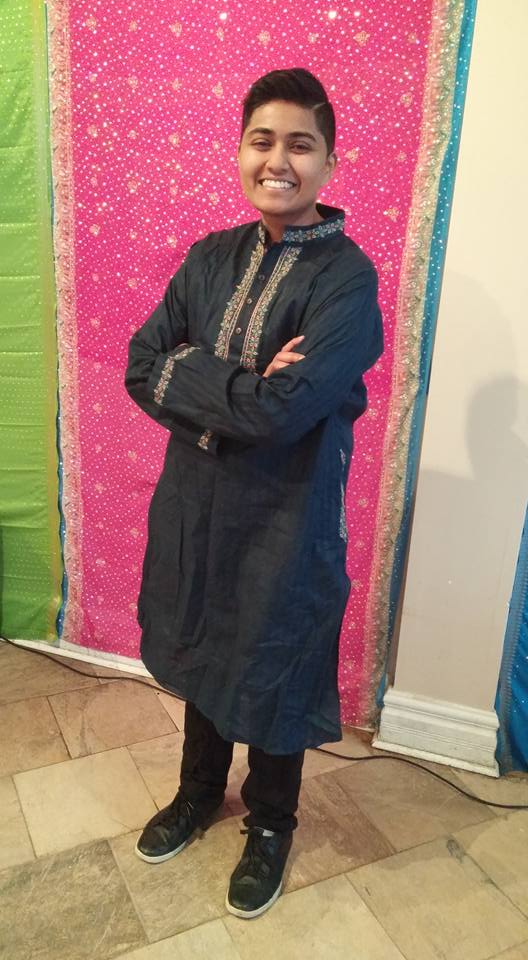 Communication was a major barrier for me in relationships even when communicating with other culturally similar queer minorities. To illustrate this example, my last relationship ended partially over miscommunication over who paid the bill. Every time I asked them if they wanted me to cover the bill, they would politely decline. However, in reality they wanted me to ask them 3 times before they would agree, as commonly practiced in our cultures. By then, living 5 years in Canada, taught me that splitting the bill was acceptable if asked once. There was a severe cultural gap between us, despite our good intentions and similar cultural backgrounds.

South Asian cultures are high context. In other words, our meaning is implied, and indirectly stated, unlike western cultures which are low context, where direct frank communication is more widely practiced. This problem accentuates in South Asian queer communities when it comes to negotiating sex. Indirect communication makes consent trickier to determine. A reluctant yes is read is an overt yes, and negotiation over willingness to use condoms or participate in certain sexual activities becomes overpowered by someone with a more direct communication style. Some of these situations end in disastrous consequences.

Being aware of differences in communication styles really helps avoid misunderstandings and conflicts, but we can’t also forget that the same dynamics apply even between people who from similar cultural backgrounds, as was in the case of my date. People’s cultural communication can also change depending on their exposure to other communication style or social circles. Hence, I had to learn to not assume people’s intentions, ask clarifying questions to ensure that intent matches the perception, and keep routes of communication open at all times for a constant check in.

I came across a statistic stating:

LGB youth who come from highly rejecting families are 8.4 times as likely to have attempted suicide as LGB peers who reported no or low levels of family rejection1 with those numbers even higher for trans youth.

It was no surprise to me since family rejection is a major concern for many queer South Asians. For such a tight knit family based culture, rejection from family can be devastating and contribute to feelings of shame, anxiety and depression.

However, shame is not brought only by sexuality and gender. It is more complicated and multi-layered than that. Shame can also be linked to the simplest things, such as our education status, which is deeply linked to our culture. South Asian culture places high value in wealth, education, and career choices. For me personally, education level and money played the greatest degree of shame in addition to my gender and sexuality. Although I graduated from a good university, finances were hard to come by without family support and saving for gender reaffirming surgery. I perceived myself as a disappointment to my family, not only due to my gender and sexuality, but also due to my financial status and career choices. I never felt good enough unless I was a doctor, and often chose to concentrate more on work and education than personal relationships, in order to cover up skewed perceptions of myself.

In years, I had to recreate my own measure of success based on my own personal values of hard work and integrity – independent from cultural standards imposed on me from both the western ideals or the ones from my culture. Whenever I asked myself “Who am I to be a successful South Asian trans person in a western world without many South role models, let alone trans ones?”, I kept reminding myself of Mindy Kaling’s quote, “Why not me?”, and remembered that I still had room to be one of the first ones, and set that standard of worthiness for myself.

Of course, there are many other factors affecting how we make choices, such as family history, personality, education, and access to resources and support, but it would be naïve not to acknowledge the cultural influences on our behavior in regards to our relationships. We can learn to reconcile our conflicting cultural values by setting our own set of values, ways of handling boundaries, and creating open communication channels, in order to create healthier queer relationships and a healthier sense of self. It is an ongoing process, but one that is worth it, and can be defined by ourselves. After all, queer people have always been good at reclaiming identities.