Transgender Harassed at Night by Goons in Kolkata as Police Refused to File FIR, This is What Had Transpired 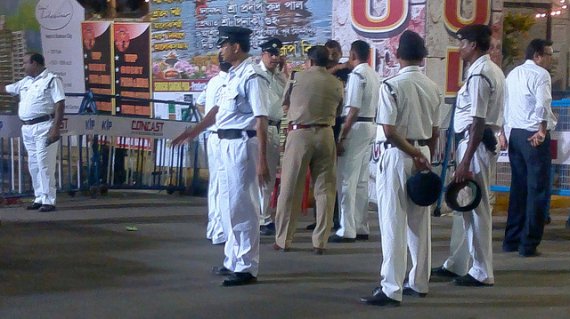 Anurag, a young transgender woman, and her friends were travelling in a metro in Kolkata during Durga Puja celebrations, when insults were hurled at them by a group of boys in the metro. When they got out of the metro, a confrontation ensued, and Anurag and her friends were physically assaulted. They went to the police, but all in vain.

Below, Debapriya, advocate for Anurag and friends, recalls what transpired on that fateful night.

Anurag Maitrayee, along with Krishti Sarkar and 3 others, was travelling from Shyambazar to Jatin Das Park on 23.10.2015 at about 1:30 am through Metro for pandal hopping at Madox Square on the eve of Puja. Four guys were sitting on the seat opposite to the one where Anurag and her friends were sitting in the Metro. While travelling they started making unwanted sexual gestures and advances, including facial expressions towards them.

Initially they tried to combat the situation by gently rebuking them, but the perpetrators were unperturbed. The situation worsened as the harassment increased. One of the victims, being at the receiving end, got intimidated and terrified by the harassment. She was trying to uncomfortably accommodate herself in the situation and wait till their destination comes. Since the harassment increased to an intolerable level, Anurag protested and verbally warned the perpetrators to stop their unruly activities. Finally their destination, that is Jatin Das Park Metro station, arrived and they got out of the metro station thinking that the turmoil was over. Unfortunately as they were advancing towards Maddox Square, they were being followed by the said hooligans and were suddenly stopped by them at Hazra road in front of Khalsa Hotel.

The perpetrators surrounded them and pounced on Anurag and started randomly slapping, kicking and beating her up. They threw her to the ground and continued beating and kicking her. Anurag somehow managed to reach the nearby mobile police van and informed them about the torture. Anurag and Krishti helped the police to catch the goons and earnestly requested the police to arrest them and initiate proper penal proceedings against them. The police, with full empathy, scolded the goons.

A new chapter of hypocrisy and intolerance began at Tollygunj. The officer in charge of Tollygunj police station, named Mr. K.K Sharma, invariably started mocking, ridiculing and abusing the transgender community and eunuch community as a whole. He commented that these community people are all beggers, sex workers and trouble makers. Moreover he almost denied the incident and presumed guilt on the part of the victims. He further commented that harassment of the trans people is impossible and refused to lodge the complaint. Later, after Anurag and Kristi protested, Sub-Inspector Subrata Sarkar lodged the FIR. But till, date not a single person has been arrested and no penal action has been initiated against them for committing the offence. The FIR has unfortunately remained as a piece of paper with no effect!

Note: Tomorrow, 27th October, there will be a mass deputation for Anuraag happening in Kolkata.