If you have been living in India, or follow LGBT related news, you must have been aware by now that a matrimony ad for a gay arranged marriage appeared in one of the newspapers of Mumbai. While I am not sure how many people had seen the initial ad in the newpapers (until you follow the matrimony columns religiously), “news” about India’s first gay matrimonial ad has been on every media- print, online and TV. For those of you who might have missed it, here’s what the ad read: 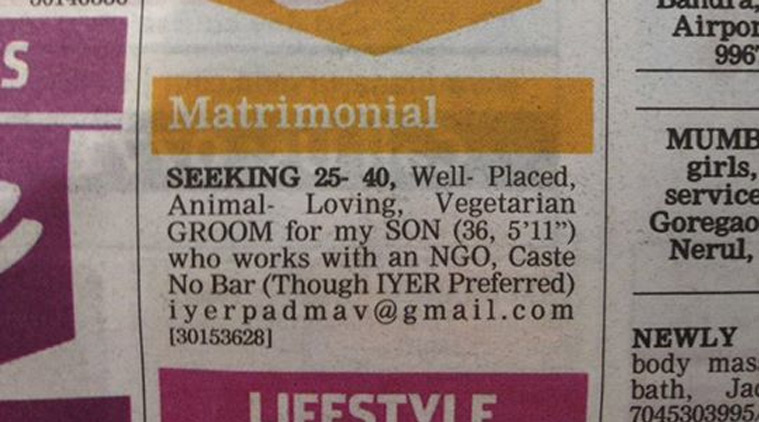 The ad has triggered a debate since then. While it was appreciated for the courage and acceptance shown by Harish’s mother, and the concern she has for her son, it has since been equally criticised for the “caste preference”.

But before I write down what I find problematic in the ad and the claims of the defendants, there’s no doubt that it must have taken an immense amount of courage on the part of the mother to put up the ad, and the step, even with whatever shortcomings, is laudable.

When I read it, my initial reaction was a mix of surprise and joy, but as I finished reading the complete ad, I was left dismayed. Indian LGBT movement is still at a nascent stage when compared to the Western counterparts. Despite the wishes of some people, the truth is that legalization of same-sex marriages are a distant dream. But given the trend world-wide, there is no doubt that the demands (and probably legalization) would happen in the future sometime. Marriages in India are not simply a matter of two people, who are in love, tying the knot. In India, marriages can be an extremely dangerous affair if any of the set rules of the society are broken, including caste, religion, gotra and a hundred other things. Arranged marriages make this institution more complex, and are more aimed towards “settling down with a person” (of the same caste, religion, gotra etc) and continuing the “family line”. Love may or may not happen in such marriages.

Given that the LGBT movement is about demanding an inclusive and equal society, and the fact that it is still at a nascent stage, what we have is a historic and golden opportunity to set/change the customs/rules for traditions/institutions that we may be adopting, and marriage is one such institution. Marriages, especially arranged marriage, are beset with too many evil customs including dowry and casteism. My greatest disappointment with the ad was how a historic opportunity to redefine such an institution had been withered away by none other than a gay-rights activist. This was also a chance to show to the straight counterparts on how marriage should be about two-people and not about their religion or caste. But alas, in India, we can’t do away with our caste “preferences” (or is that a bias?) even when we have the opportunity to do so.

Too much has since been written and debated about why a “preference” for the same – caste cannot merely be dismissed as a personal/private matter, given the way caste oppression operates in India. But what I would certainly like to address here are some of the arguments that have since sprung about in defense of the advert.

As the controversy broke out, the “Iyer Preffered” was first projected as merely a “tease” or sarcasm. But as this article points out, it if indeed was supposed to be sarcastic, then “Perhaps, Faking News could have served that purpose more effectively.” But later, it came down to a matter of “preference of the mother”. In one of the forums, Harish explained “she knows IYER people better and mingles with them easily rather than people from other castes.” (sounds casteist?)

I find this whole attempt at deflecting the caste bias on the “preference of mother” to be even more problematic. As he himself wrote here, the ad was drafted with his knowledge, and was rejected by 3 publications before being accepted by Mid-Day. Shouldn’t then adults have a say in their own marriage? Should we then not correct our own parents, if we know/realize that they are wrong? The LGBT movement is also about standing up to your family and parents. No one here doubts that Harish’s mother has been very accepting and loving, but we can carry our biases sub-consciously too. Too many parents, despite knowing about their child’s sexuality want them to get heterosexually married. My own mother, despite having come out to her, never misses an opportunity to express her desire (or shall I say preference) to see me married the heterosexual way, and each time I have to tell her why and how this would be harmful. Despite our respect and love for our parents, they can be wrong many times, and it is essential that we take a firm stand and point out how/why their “preferences” are harmful.

Most people who have gone on to defend the caste preference have mentioned how such ads by heterosexuals carry similar “preference”, with someone even suggesting that if anything, the ad will show to the society that homosexuals are as “normal” as their straight counterparts differing only in their attraction. That raises another important question- Are we so desperate at appearing “normal” and being “accepted” among the society that we will do anything, even if that involves following regressive customs? Will we next also be celebrating “dowry demands” in gay arranged marriages? After all, that would make gay arranged marriages “appear” similar to straight ones. And if adoption or surrogacy by same-sex couples were to happen, will the same “male child preference” by gay couples in India be encouraged, lest we appear different?

Others have suggested that it is a “personal matter of choice” and hence should be left at that. But the ad was never personal from its inception. It was a political statement in a country where 377 is still in the statue books. Harish, an activist himself and someone with a well connected with media, would have known that well. Like all political things, the ad was going to have its impact for the LGBT movement, and so it is imperative that we discuss what kind of movement we want to build? One, that is inclusive and looks past the caste/class/religion divide and welcomes all, or one where we seek “equal rights” while propagating various kinds of discriminations?

This wasn’t the first time that caste faultlines of the LGBT community were exposed (there have at least two events in the past which were criticised by a few for the casteist tones, but more on that in another post). But this is certainly the first time that there have been discussions of this level at all forums. The ad has provided us with an opportunity to introspect and think on the kind of movement we would like to build. Hopefully, others too will realize that it is important to listen to critiques and have discourses on topics which have the potential to change the direction of the LGBT movement and affect the not-so-privileged among the community.