Right to Marriage Should be for All: An Open Letter to BJP MP Sushil Kumar Modi by Trans Activist Akkai Padmashali

I was deeply disturbed to see your speech in the Rajya Sabha warning against any legal recognition to same sex marriage. As a transgender person who is part of the “Lesbian Gay Bisexual Transgender Queer Intersex Jogappa Marladi ++ movement”, I believe that the right to marry should be applicable to all persons and not restricted to ‘Men’ and ‘Women’.

You oppose ‘same sex marriage’ as in your opinion marriage had to be seen as ‘pure’ and it means ‘biological man and biological female’.  The point the LGBTQI movement has been making is that  gender is a spectrum.  Taking my own personal example, I was born a male, though I always knew that my identity was a woman.  With the increase in awareness and my own confidence and strength I have now transitioned to becoming a woman. However in your definition, I am not a ‘biological woman’ and hence not entitled to get married.  This denial of marriage to those of us who are not  biologically women is a denial of the very principle of equality and the right to lead dignified lives.

Apart from me there are many others who are not biologically female or not biologically male.  There are others who fall on the rainbow spectrum of gender. Surely all of us, not just biological men and women, have a right to participate in the institution of marriage ? Not doing so violates our constitutional mandate of equality, dignity and inclusiveness.

I am also surprised that you think that  same sex marriages are not recognized in Indian culture and tradition.  If anything the rich cultural traditions of India have always made space for different kinds of love and different kinds of marriage. What you define as our centuries old traditions is not homophobic and transphobic but is inclusive of the diversity of the human family include homosexuals, bisexuals, intersex people, lesbians and transgenders.

You make the point that were same sex marriage to be recognized, it ‘would cause complete havoc with the delicate balance of personal laws in the country.’ Assuming that the court recognizes the marriage of all persons ( not merely biological men and biological women), through an amendment of the Special Marriage Act, then personal laws will remain untouched.  So your fears seem to be unwarranted as the Supreme Court is considering the provisions of the Special Marriage Act alone. One hopes against hope that this technical clarification will allay your concerns and you will from a strong opponent become a fervent supporter of  the recognition of the marriage of all persons under the Special Marriage Act !

I was surprised to see that in your speech you also advised the  Court not to give ‘a ruling that goes against the nation’s cultural ethos, culture, and thoughts.’ To me the Courts do not decide based on ‘cultural ethos’, but rather on the basis of the Constitution. The morality the judges are duty bound to apply is not popular morality but constitutional morality.

I would like to remind you of Babasaheb Amebdkar’s words when he said that, Constitutional morality is not a natural sentiment. It has to be cultivated. We must realise that our people have yet to learn it. Democracy in India is only a top dressing on an Indian soil which is essentially undemocratic.

It is the responsibility of the Courts to protect constitutional morality. I am confident that the Supreme Court will decide the matter based on the anvil of the Constitution and not cultural ethos and protect the right to equality and dignity of LGBTQI citizens of India.

Finally you were wrong to assume that this battle was by ‘left/liberal people’ who  are ‘attempting to bring legal recognition to same-sex marriage.’ I would like to remind you that I am a part of the transgender community, which is very much part of Indian culture and tradition. I am fighting for the right to marry for all. Thereby I am fighting for the right to equality and dignity for all persons.  Some of us may be left, other liberal and yet others part of the hijra, transgender and sexual minority communities. There is a rainbow spectrum of support for the right to marry for all persons. Our support for marriage for all is deeply rooted in the history and tradition of this land and our interest in the right to marry cannot be dismissed as an elite concern. 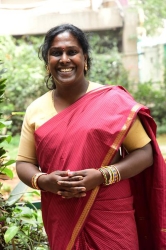