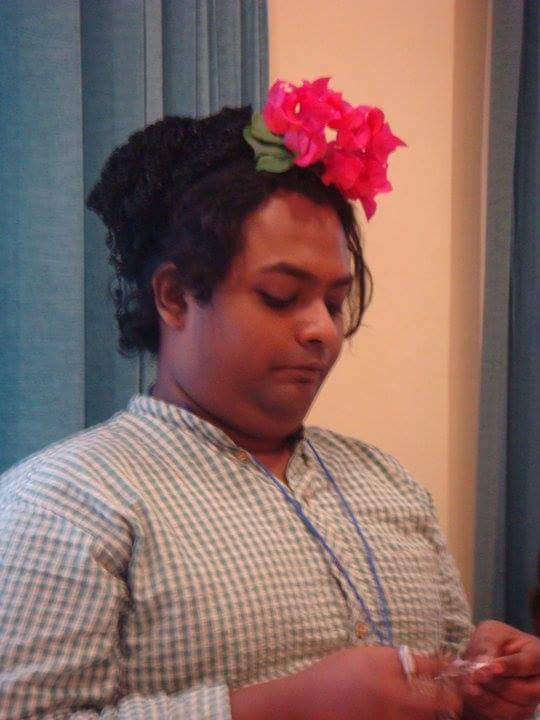 In 1996, at the office of Praajak, the first NGO to take on work with sexual minorities in Kolkata, I met a young guy whose introductory remark to me, quiet sudden and thus surprising, was a loud “Ei jay, aami mohilaa,” meaning, “Hey there, I am a woman”. I was too naïve at that point to understand the nuances of gender expression. I only remember the conviction of a 16 odd year old in saying the exact opposite of what s/he appeared to my then untrained eye.

That guy was Agniva Lahiri. She passed away on the early morning of Tuesday, 20th September 2016. She had not kept well for some time, had repeatedly been hospitalized, and her liver apparently gave way finally.

Over the years, I have kept up with her and her activism. In my own small ways, I also tried to help her, and PLUS, the organisation that she had set up to help trans and genderqueer victims of abuse and violence. It was not an easy path that she chose to tread.

Being a loud mouth that always said things the way she saw it, the powerful people who control the NGO sector and can cause impediments if they did not like you, were often at odds with her. Yet it is a testament to her resourcefulness that she managed over the years, to run her organisation and the shelter called ‘Prothoma’ that it had set up, in spite of the odds she faced. Prothoma, over the years, was a home and first stop for countless trans and genderqueer persons escaping their milieu of violence. It became a stepping-stone to personal emancipation and an escape route to a better possibility for all of these people.

It is her relentless and constant engagement with the activist world that was inspiring. She worked for transgender and genderqueer sex work rights, and thus also engaged with the sex workers movement.

She was one of the first persons to accept and understand the international youth movement and engaged Indian youths actively with it. In the process, she put the stamp of queer consciousness on that movement, which otherwise would likely have stayed another straight-washed, ‘sanitized’, government supported space that did little meaningful to real youth lives.

She was one of the first and active engagers with the HIV/AIDS movement and her work repeatedly tried to focus the state’s attention to the targeted needs of specific communities in India, as opposed to the less risky ‘let us address billboards to all and sundry’ approach that the government found comfortable. This was intuitive understanding that came from being a fellow sufferer, way before ‘targeted interventions’ became the accepted and expert supported wisdom.
And all of this was not without a price in personal costs. A few years back I spent an evening with her in Delhi, while she was visiting. We were sitting and talking and she had already downed half a bottle, and was a little tipsy. Maybe it loosened her up a bit and we got talking on many things including her personal life.

The details are not important and may be are too personal to divulge, but what stood out was that she was lonely and craving company. While in her characteristic way she blamed it on the fact that that she was gaining weight, she was also candid in letting know that the life she chose was not helpful. An emancipated, powerful, well articulated, and on your face kothi¹ was not the idea of an ideal partner for the traditionally masculine.

There were also the problems with money and resources. It was never enough to meet the needs of those she was choosing to serve. Her way of dealing with that was to invest her person more fully with the people she was trying to help. But that too extracted a personal cost. I remember an expression she had used that night: “Nijey kay kete kete bili kore doiyechi”. Meaning, “I have cut out pieces of me and distributed it.” Spoken through a drunken stupor, it exemplified her in a few words.

I was reading an obit statement by a fellow academe activist, where he mentioned that someone who worked closely with Agniva had said that “She had hungry days”. That is so true. The hunger was actual and metaphorical. It was a hunger of the body and of the mind. It was fueled in equal measure by lack of money for food, as by the lack of someone you could cuddle with and forget about the lack of money or food.

That night, Agniva had acknowledged that she had an issue with alcohol. She’d said that the bottle was a true-true-friendship. As she had put it, it lifted a ton off her head and helped her sleep peacefully. In the end I think it is that true friendship which helped push her liver over the brink. At a certain level, this makes the rational me very very angry. At another level, I can completely fully comprehend and empathise.

It was a short time that she was here with us, but it was long enough for her to touch many people. She exasperated many, and I include myself in that list, but anyone who chose to see her closely, saw through to the good heart she had. Now that she is gone, she has taken those exasperations with her. Memories of that good heart is what I would like to stay on with.

¹ A term used as a marker of self-identification by feminized males in many parts of South Asia.