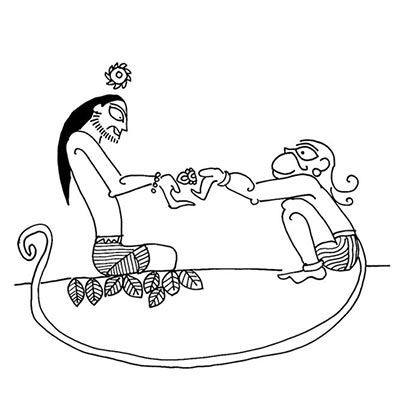 Your Smile, My Tail

When Hanuman returned from Lanka with a burned tail, and recounted his adventures, many monkeys of Kishkinda burst out laughing. “So, you got your tail burned to save his wife?” they said pointing to Ram. They thought he was a fool. Smart people burn their tail to save their own wives. Smarter people don’t get their tails burned at all. Only fools behave as Hanuman did.

For a moment, Hanuman did feel foolish. But only for a moment. He looked towards Ram, who looked less like a warrior-hermit and more like a lovebird separated from its mate. Hanuman saw Ram’s sad eyes sparkle with hope of receiving news that Sita was in Lanka, waiting for him. The burning of his tail was painful. But that hopeful smile on Ram’s face made it worthwhile.

The idea of finding joy in other people’s joy, supporting others’ causes, even fighting for the rights of others is not unknown. Many people do it. Like Hanuman, there are many who don’t think twice about helping others, even if it means getting into trouble, getting their tails burned.

In behavioural economics, there has long been an assumption that humans are rational and selfish. Increasingly, they are finding this assumption flawed. In different situations, people can be irrational and selfless. They do contribute to alleviate other people’s miseries. They do feel joy in a stranger’s happiness.

Last week saw many Indians, gay and straight, celebrate the American Supreme Court’s decision legalising gay marriage. This celebration was abuzz on Facebook where users gave their display pictures a rainbow filter to show support. It is not often that people feel happy when other people in faraway lands get what they cannot dream of. It was perhaps hope. Maybe someday, the Indian Supreme Court, or the Indian Parliament, will acknowledge the human rights of gay people. It’s similar to the hope of a Dalit, who has been denied access to the village temple all his life, who hears tales of temples without restrictions in other parts of India.

It’s a similar kind of hope that Americans feel when we tell them that India and Bangladesh and Pakistan have had women prime ministers. That it is possible.

While many expected their friends to make fun of them, what took many by surprise were the hateful comments some of them received. Virulent, toxic, even homophobic, barbs. This, from ‘tolerant’ Indians! Even from proud Hindus who speak of their glorious non-violent non-colonial heritage!

This spite was absent when there was a wave of sympathy following the Indian Supreme Court’s decision to recriminalise homosexuality: a decision that shocked several former British colonies that has seen India as a beacon of intellectual hope. There were many supporters then, as is expected in times of real tragedy. But many could not stand this expression of imagined joy in the virtual space. It embarrassed them, frightened them enough to argue this childish glee. They spoke of other issues that were ‘more’ important. They spoke against the nature of ‘marriage’. They spoke about America being a racist country. They spoke of ‘pink-washing’: use of pro-gay activities by the state to hide its imperial designs. None of this was really necessary. No one was hurting anyone by putting a filter on their profile pictures. But clearly it drew out inner demons.

There are many who can’t stand the hopeless getting support. So they like being mean. They will go on marches when women are raped, but will get angry when women get more rights. They will oppose untouchability, but get upset when there is talk of Right to Education. They will comfort you when you cry. But they won’t burn their tail for your smile. But that’s rational, isn’t it?