A Carnival In Hyderabad To Spread Awareness On Queer Issues

After a row of protests, social media outbursts and many more activities of uproar from the LGBT community post the Supreme Court Judgment which recriminalized homosexuality, here‘s a whiff of fresh air – an event of celebration, fanfare and merriment by the Queer Campus Hyderabad (QCH). QCH is a group of young queer students from Hyderabad- the city of Nawabs– and is organizing a carnival on Jan 18th at LaMakaan, the most popular place in Hyderabad for cultural events.

Started six months back by an enthusiastic and unabashed group of students, QCH primarily focuses on students and aims to create a safe space for them to come out and experience freedom. The group deals with basic problems faced by queer youth at campuses like bullying, lack of awareness, identity crisis etc. They’ve been organizing sensitization programs at colleges and weekly meetings for the community members to come together and discuss various topics.

The main idea behind the carnival is to spread awareness of queer existence in the city and use cultural events as an ice-breaker to reach out to the society. LaMakaan is a very popular place and is constantly mobbed by aspiring creative artists, journalists, theatre & film-making enthusiasts, activists and youngsters. Hence, the group decided to conduct an event there to bring maximum visibility to them.

So what exactly is going to happen at the carnival? There’s going to be a flea market where a number of individuals would put up handicrafts and a bunch of other indigenous handmade artworks. From charcoal sketches to quirky bookmarks to painted bottles, there’s going to be a row of products on sale for affordable prices which you can’t resist. There’s also going to be an art gallery featuring works by budding artists from the community who are struggling to come out in the public.

A host of cultural events have been organized featuring performances by not just people from within the community but supporters and allies as well. There’s going to be a Mujra, Bollywood & Contemporary performances, music bands and solo artists performing songs of pride and love.

The carnival is free and open to all. In fact, the volunteers of QCH are also creating an accommodation pool, i.e, a database of individuals who can host visitors from other cities, to encourage queer friends from neighbouring places to participate.

So mark your calendars, book your tickets to Hyderabad for the 18th of Jan and begin 2014 with celebration, joy and pride. 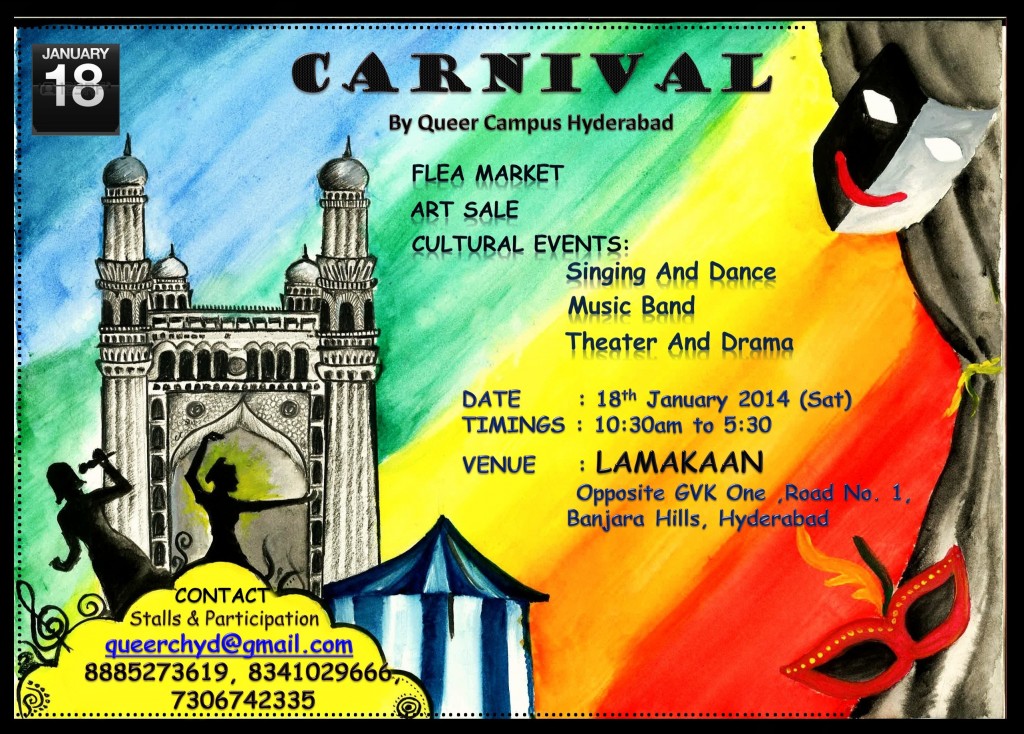