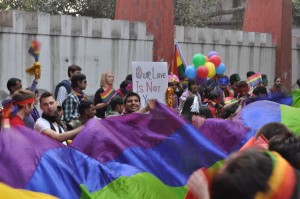 The Delhi Pride March will be taking place on the 25th of November, undeterred by the metro constructions going on in the city. The march will be followed by a picnic near India Gate. The pride march in Delhi that has been going on since 2007 will have the theme of Gender Variance and Identity and Expression this time. In keeping with this theme, a stage has been constructed at Jantar Mantar where transgenders will express themselves through speeches. The Delhi pride has grown from just 300 participants in its first year to around 4000 in 2011. “We expect to reach at least last year’s number, if not more, this year,” said Aditya Bandopadhyay, one of the organizers of the Delhi Pride March.

The Bangalore Queer Pride will be on 2nd Dec, and will be preceded by a fortnight of events and celebrations. The organisers have brought the highly acclaimed and successful play Ek Madhav Baug to Bangalore, which will be staged on 23rd Nov. A candlelight vigil to commemorate the International Transgender Day of Remembrance will be held on 22nd Nov at Town Hall. Other events include a Garage Sale, Diversity Fair, a photo exhibition and a writing workshop.

The Mumbai Pride March will be held on 2nd February 2013, following the Pride Week and is most likely to take the route from August Kranti Maidaan to Girgaum Chowpatty. The theme for this time is ‘Raise Your Rainbows’, where people from all sexual orientations will come out to support LGBT Rights. A unique initiative of the march will be the green volunteers who will clean up the litter created by the marchers. Funds for the march are being collected by a concert called ‘Dancing Queens’, organized by transvestites, who are for the first time raising funds for other sexualities.