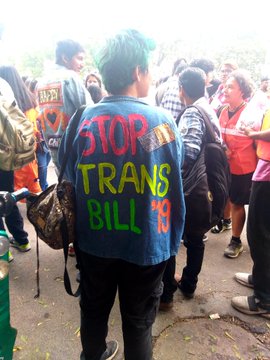 On November 20th, 2019, paradoxically on the same day as the Transgender Day of Remembrance, the Rajya Sabha began debating the Government of India’s Transgender persons (Protection of Rights) Bill. After debating over its various provisions for four days, the bill was passed by the Upper House of the Parliament on Nov 26th, making it a law.

The Bill was first introduced by the NDA government in the previous Lok Sabha session in 2016, and was later sent to a Parliamentary Committe for recommendations. The government accepted some of the recommendations and the revised bill was passed by the Lok Sabha in December 2018. However, it could not be passed in the Rajya Sabha and as the country went for polls, the bill elapsed. After NDA came back to power, the bill was reintroduced and passed by the Lok Sabha in the monsoon session, without much discussion as the entire monsoon session was dominated by removal of Article 370 in Kashmir.

In both Bengaluru and Delhi Pride Marches, which happened on Nov 24th, participants carried posters and banner condemning the bill and asking the Parliament to not pass it. The bill violates the constitutional rights of trans persons by restricting their freedom of movement and residence to familial spaces and rehabilitation homes; it is discriminatory because it upholds much lighter penalties for sexual assault on transgender persons compared to cisgender persons; and it violates the NALSA judgment by framing a two-step process where transgender identity is first mandatorily granted by a District Magistrate with a requirement for surgery before one can change this to a binary gender marker.

A number of MPs in the Rajya Sabha spoke against the various provisions of the Bill. Tiruchi Siva of DMK and Rajeev Gowda of the Congress moved amendments as well, which were defeated. Derek O’Brien and Shanti Chhetri of AITC, Sasmit Patra of the BJD, Jharna Das Vaidya of the CPM, Wansuk Syiem, Ghulam Nabi Azad, Hanumanthaiah and Hussain Dalwai of the Congress Party, Vijila Satyanath of the AIADMK, Jaya Bacchan of the Samajwadi Party, Manoj Jha of the RJD, Sanjay Singh of AAP, Vandana Chavan of NCP, Binoy Viswam of CPI, P. Wilson of DMK, Amar Pattnaik of the BJD, all presented a unified argument for not passing the bill in its current form, and instead sending the bill to a select committee for making several necessary vital amendments.

As soon as news of the bill being passed by the Rajya Sabha was received, members of the LGBTQ community came out to protest. In Bengaluru, a protest was held at Town Hall on Nov 26th in the evening, while in Delhi people protested at Jantar Mantar.

Here are some of the most harmful aspects of the 2019 version of the Bill: