Mumbai: France and India, both vibrant democracies, are known for their individualistic yet diverse culture, food and style, besides sharing a common passion for cinema.The first cinema show in India was arranged in 1896 at the Watson Hotel in Mumbai by the agents of two French brothers, Louis and August Lumiere,pioneers of the Cinematography in France. Over the years, French cinema has deeply influenced Indian filmmakers.

KASHISH 2012 takes this cinematic alliance to a whole new level this year. KASHISH pays tribute to French queer films and filmmakers with its ‘Country Focus – France’ package of two feature films and six short films – from a musical drama to a sensitive romance and of course the ‘very French’ avant garde shorts, portraying diverse queer expressions in contemporary French Cinema. Consul General of France in Mumbai Jean-Raphaël Peytregnet said, “It is a great honour that France is the country of honour at Kashish 2012. I wish this edition of Kashish festival great success and intend to be part of this prestigious festival for a long time.”

“KASHISH has been partnering with Alliance Francaise de Bombay for the past two years as a Venue Partner and we have seen a fantastic turnout at the South Mumbai venue, mainly attended by a large section of the Alliance Francaise members, many of whom are studying French and were keen to see more French films. We felt we should cater to this need by partnering with the French Embassy and bringing more French queer films to our festival. The films in this section are innovative in form, sensitive in content and offer a glimpse of queer France,” says Sridhar Rangayan, Festival Director. “These films may even motivate many of the audience to make that long-postponed trip to France – to experience the queer culture live!” he adds with trademark humour.

‘Country Focus – France’ package is brought in association with Embassy of France in India, Institut Français and Alliance Française de Bombay.Co-Festival director Pallav Patankar feels that the engagement with France is not limited to cinema. “As the LGBT community fights for its rights in modern India, it is important to note that France had reformed its laws on homosexuality from the 17thcentury. France hence represents one of the most accepting nations on LGBT issues. The French Embassy as well as Alliance Francaise de Mumbai have been supportive of the LGBT movement in providing the space for several queer events, functions and LGBT related donations for the Mumbai LGBT community. From the community perspective it is indeed an honour to have France as the Country of Focus in Kashish 2012,” says Patankar. 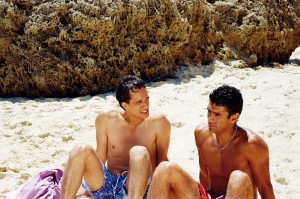 directed by Mehdi Ben Attia.Gigolais a breath-taking exploration of the gay underbelly of Paris in the 1960s through the eyes of a suave lesbian hustler; andLe Filis a bitter-sweet romance that’s plays on the class difference between a rich young man and a handsome young labourer. Both the films boast of wonderful cameos by two of France’s extraordinary top notch actresses – Marisa Paredes inGigolaand Claudia Cardinale inLe Fil.

The Country Focus also includes a short film package: FRENCH RENDEZVOUS with six short films portraying Contemporary French Queer Cinema – ranging from tender love stories to tongue-in-cheek humour to action thriller. “Few of these are made by first time filmmakers, but their films do leave a long-lasting impression on viewers,” says Saagar Gupta, Festival Programmer. “Also it’s very remarkable to see how young French filmmakers are approaching stories of queer relationships by placing them in absolutely un-trodden, unexplored terrains – like in the short filmThe Incredible Adventures of Fusion Man. Finally we now have a gay superhero!” adds Gupta.