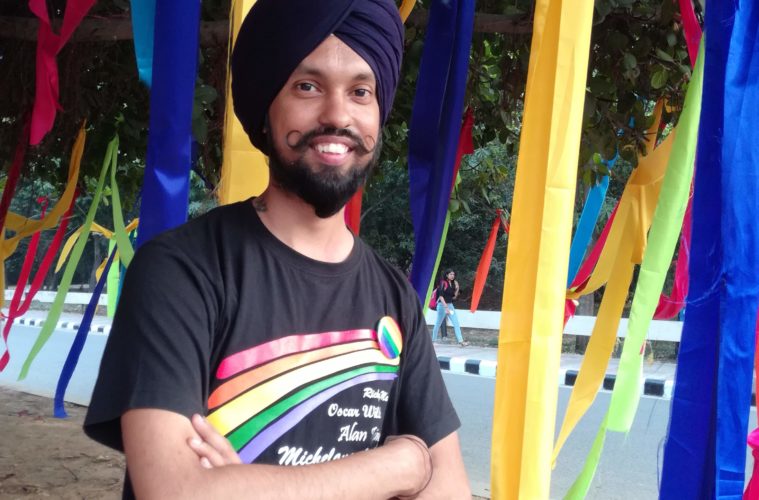 Sukhdeep Singh, the founder and editor-in-chief of Gaylaxy, has been awarded the January Marie Lapuz Youth Leadership Award for 2016. The award, incorporated by Canadian organisation Sher Vancouver in memory of January Marie Lapuz, is an annual award bestowed upon a deserving youth between 16 to 30 years of age who has demonstrated involvement, commitment, and leadership in the LGBTQ+ community whether locally, nationally, and/or internationally.

Sukhdeep was selected to receive the award “because of the significant influence and impact he is having on advancing LGBTQ+ rights in India and South Asia and abroad, not to mention his innovative use of technology on various platforms to create more awareness of LGBTQ+ issues. The selection committee was also very much aware of the fact that it takes considerable courage to advocate for LGBTQ+ rights in India where homosexuality is still very much a taboo in society.”

Sukhdeep received a cash prize of $500 in Canadian funds from Sher Vancouver founder, Alex Sangha. “I feel absolutely honoured at receiving the award. I thank Alex, Sher Vancouver and the jury for the recognition. But most of all, I thank all the contributors and supporters of Gaylaxy who have helped me throughout, and put their faith in me and Gaylaxy. This journey wouldn’t be possible without them,” he said.

Sukhdeep launched Gaylaxy as a monthly magazine in 2010, while still pursuing his Bachelors of Technology from IIT (ISM) Dhanbad. Over the years Gaylaxy grew as a platform that connects the LGBTQ+ community and provides them information as well as entertainment. Gaylaxy as a medium has published many personal, powerful and heart touching stories of LGBTQ+ individuals. Gaylaxy has also emerged as a strong LGBTQ+ voice in South Asia, with a number of Pakistani LGBTQ+ activists and writers joining the magazine and writing about the happenings in their country as well. A Hindi section was added to the magazine in 2014 to cater to Hindi speaking population. It has also started organising offline events to create awareness among youth on LGBTQ issues.

Sher Vancouver is a social, cultural, and support organization for LGBTQ+ South Asians and friends in Canada. her was founded in April 2008 and currently has over 600 members and is based in Surrey, B.C. January Marie Lapuz, on whose memory the award has been incorporated, was the Social Coordinator of Sher Vancouver. She was the first transgender person to hold an Executive position with the group.