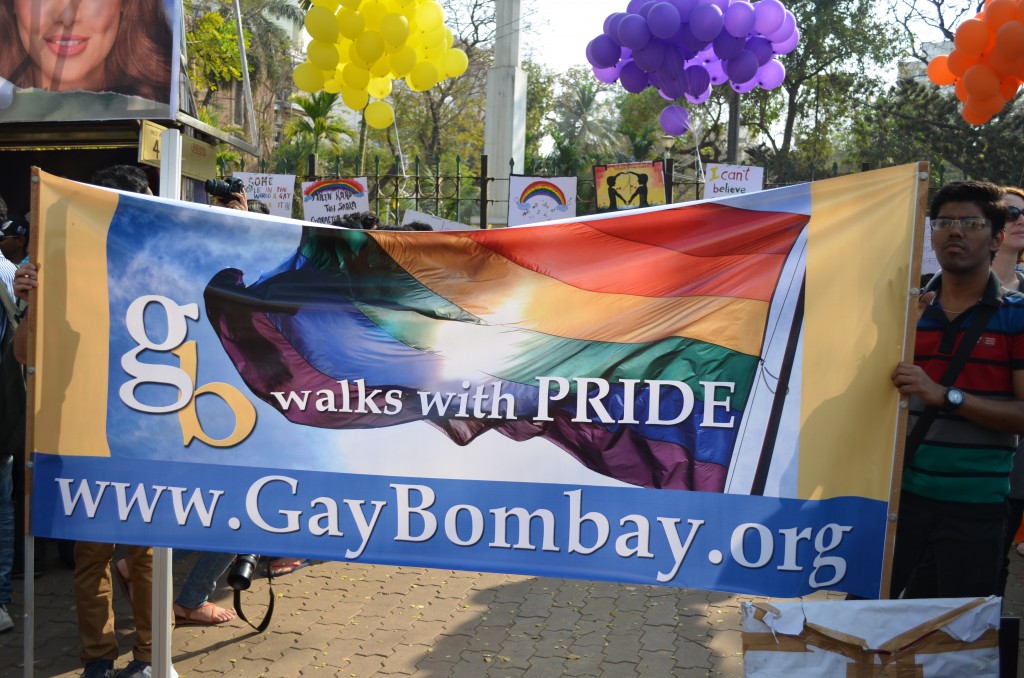 On a warm Saturday afternoon, the August Kranti Maidan in South Mumbai was teeming with members and supporters of the LGBT community as they prepared to march for the Mumbai Pride day on February 1st,2014. Coming just a few days after the Supreme Court’s rejection of the review petition against re-instatement of Section 377, the march saw infectious enthusiasm and energy among all the participants. The ‘minuscule minority’, as termed derisively by the Supreme Court, was out to celebrate their sexuality with pride on the busy streets of Mumbai – at last count, well over 5000 people had participated in the pride, a number almost double that of last year.

Slated to start at 3 pm from August Kranti Maidan, the venue saw over 300 people gathered at the spot well before the scheduled time, many choosing the spot to display their posters describing what they thought of the SC verdict. Many participants turned up in their best party outfits. While some chose to go sedate and stuck with subtle messages on t-shirts, others went the whole hog with bold and daring messages on their outfits celebrating their sexuality and their right to live a life free of fetters. The whole venue wore a festive look with bright rainbow balloons adorning the pride stage and the fences of the maidan, and the beats of drums and dholaks enthusing the participants to turn the march into a celebration. 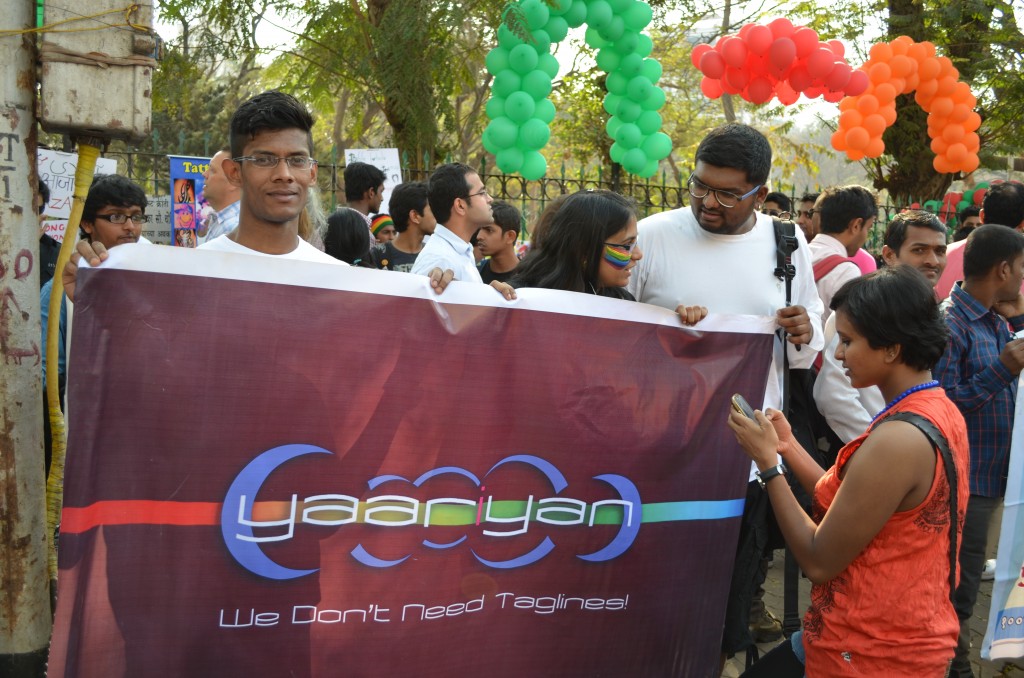 The march started off at 4 pm with veterans from the community such as Laxmi Narayan Tripathi, Harish Iyer and Pallav Patankar addressing the gathering. Loud cries of ‘Azaadi’ rent the air – incidentally, Mahatma Gandhi took the same route in 1942 marching yet again, for ‘Azaadi’ – with many placards bearing ‘377, Bharat Chhodo’ being visible on the route. Passers-by stopped in their tracks as the colourful procession wound its way down Grant Road and Lamington Road, many taking pics of the colourful procession on their cell phones. Residents of the numerous old chawls adorning the route looked eagerly from their balconies as the bright crowd danced its way on the streets. Two long rainbow flags wound their way down the streets, as participants scrambled to alternately hold the flag and dance beneath it, to the rhythm of the drums that were a constant companion. Rainbow flags were everywhere, with the number of cameras in action coming in a close second.

This year’s pride witnessed participants who had come not only from over nine cities in India specifically for the pride, but also from over seven countries across the globe. While the Supreme Court verdict did act as a dampener, it could not dampen the spirits enough of most participants who put their best colourful foot forward – some dressed as Greek Warriors, some as Arab princes, a bedecked Bengali groom looking for his – well – groom, some in ethnic Indian finery, some in the best evening gowns with Lady Gaga-esque platforms, some dressed as peacocks and some as Lady Justice. In keeping with the current political flavour, rainbow-tinged Gandhi caps with ‘Main hoon gay aadmi’ were sported by many men. 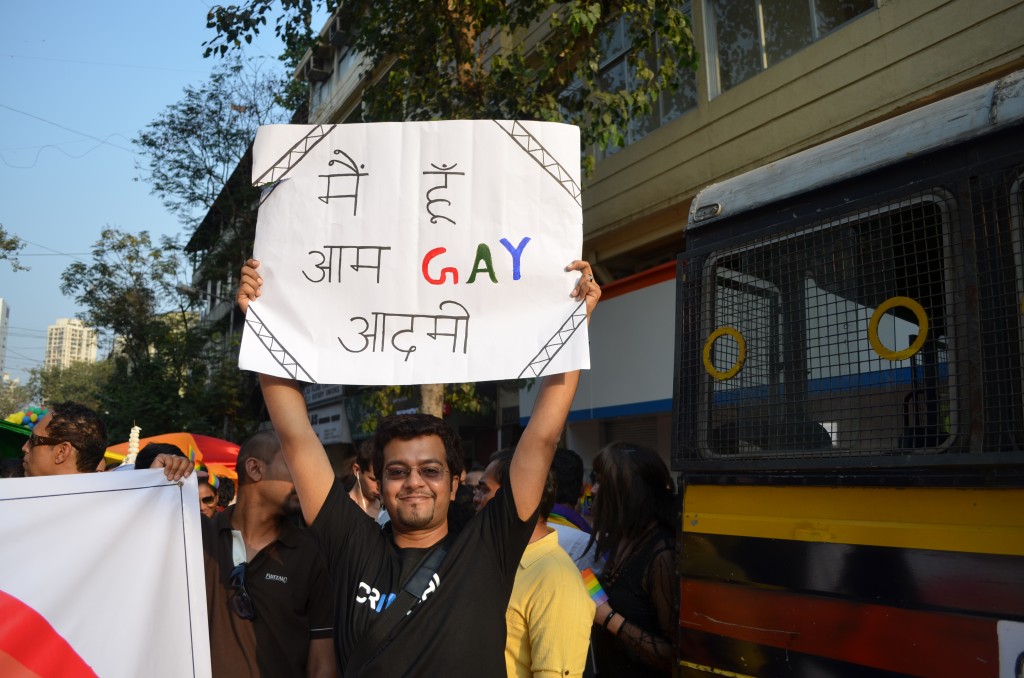 I am a common gay man

As the march wound its way down to Opera House, a big bunch of rainbow coloured balloons were released into the air, marking the end of the march. Participants hooted and lustily cheered, as the balloons ascended steadily into the afternoon sun. The participants, enthused with the infectious energy of the pride, made a beeline to the Chowpatty beach nearby to enjoy the setting sun and the sands with their friends. And though the march had ended, the rainbow was distinctly visible everywhere – on the beach, at the snack stands and in all the restaurants and bars adjoining the area, as many of the participants waited for the post-Pride party to start a few hours later at a lounge nearby. Such were the numbers that every restaurant and bar in the area seemed to be taken over by the Pride crowd, with no tables vacant. 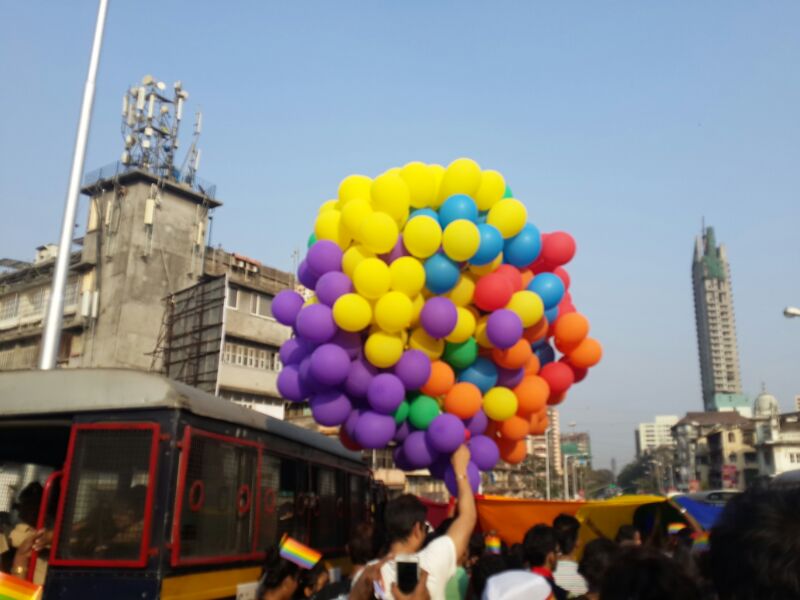 As in the previous years, and possibly in response to the Supreme Court verdict, there was a near complete absence of masks with all participants seeking to assert their identity with pride and courage. As the theme of ‘we’re here and we’re queer’ lingered in the air long after the sun had set, most participants planned to carry on their celebrations long into the weekend night, looking forward to the next edition of the Pride, and vowing to carry their fight on.