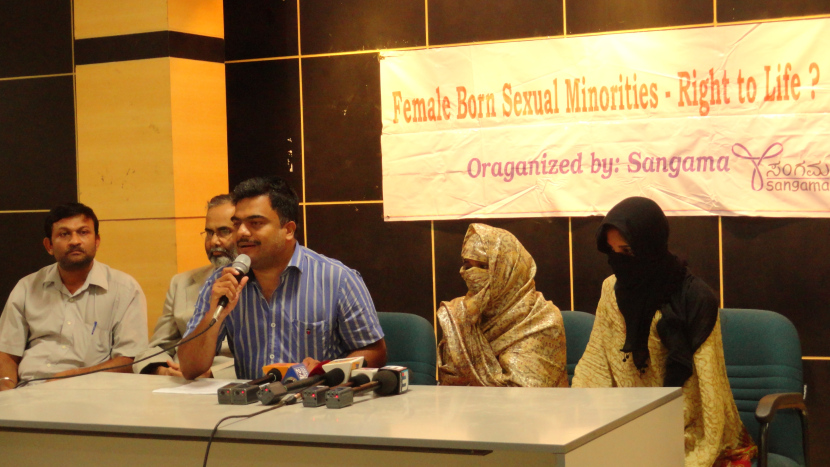 Bangalore, 27 July 2013: Two lesbians from Kerala, who ran away from their homes, addressed a press conference here today saying that they came to Bangalore voluntarily and on their own without any pressure or force from anyone.

“The girls are safe here and both the local police and Kerala police know about it. Even the father has come here to the Sanjaynagar Police Station, where after taking a written statement from the women, the police refused to send them back as the women did not want to go back to their families,’’ said Elavarthi Manohar, Joint Secretary, Praja Rajakiya Vedike and founder of Sangama.

Addressing a press conference at the Institute of Agriculture Technologists (IAT) on Queen’s Road here today, he added: “Her father has given false information and is misleading the court and the police. He knows where his daughter is and he has spoken to her both in person in Bangalore and on phone many times but still he gave a missing complaint in the police station. These are adult women who have a right to decide on their own and Sangama will definitely support them.’’

“Sangama is a human rights organisation promoting and defending the rights of sexual minorities, sex workers and other oppressed communities and has been working with organisations in Kerala for the last 10 years and from 2010 it has been directly doing local work from many cities in Kerala with community based organizations of sexual minorities with the support of Global Fund. The organisation has supported many such couples from Kerala in the last 13 years,’’ he revealed.

Sangama legal advisor and prominent human rights lawyer, Mr BT Venkatesh said, “A petition was filed in the Kerala High Court against the State and one of the women. The father of Saranya alleged that “a lesbian” had kidnapped her daughter with the support of Sangama. They have misled the court as the petition was filed suppressing the facts and the incidents that took place in the Office of the Inspector of Police, Sanjay Nagar Police Station, Bangalore.”

“He knows where her daughter is and he is in touch with her,” he added. “We will be placing the facts before the honourable court on July 30.”

Detailing about Sangama’s involvement in the case, Gurukiran Kamath, Director, Sangama said, “In the month of June 2013, Sangama Crisis helpline received a phone call from two women in Kerala asking for support to lead an independent life. Both of them narrated tales of harassment from their families and have taken a decision to come out of Kerala after due consideration.”

“Initially our helpline coordinator, after an assessment of their age and school certificates, assured them support. They requested Sangama to provide them legal support, if needed. They again called our helpline on the 6th of July 2013 saying they were on their way to Bangalore and requested Sangama to provide them support of shelter. After checking their credentials we provided them the required support including legal aid,” he added.

Addressing the media, the women said that they have voluntarily come to Bangalore on their own. “We have informed our parents and have sent telegrams to our families stating that we are safe. We also gave a written statement to the Sanjaynagar Police and informed the Kerala Police, who came searching for us, that we are adults and we are not willing to go back home.’’ It was on10th of July that Saranya’s father and Shruthi’s brother came to Bangalore accompanied by Kerala police.

Replying to a question, the women took courage and revealed their names. Both Saranya and Shruthi said they were 21 years of age.

Earlier, with the help of Sanjaynagar police, the Kerala Police came to Sangama office on July 10th and started searching for the women. The activists at Sangama stopped the police and asked for a search warrant, which the policemen lacked. They then communicated the same to the Inspector of Police, Sanjaynagar, who informed them that police from Kerala had come to his police station seeking assistance on a complaint lodged by father of Saranya that his daughter had been missing from home.

The next day the women wanted to visit Sanjaynagar police station and requested Sangama for assistance. Sangama’s representatives visited the police station on their request. The Inspector of Police, Sanjaynagar Police Station, facilitated meeting of the women with their family members. “The Police enquired whether we are interested in returning home with members of our family. We refused to return and informed my brother and Saranya’s father that we are fine and safe here and we want to live in Bangalore on our own. The Inspector of Police, Sanjaynagar, Bangalore recorded our statements,’’ said Shruthi.