In Solidarity With Mudasir

Andy Stephen Silveira writes about the events that led to Mudasir’s suicide on EFLU, the various apsects of the case and the lessons we ought to learn

The death of Mudasir Kamran, a PhD student of the English and Foreign Languages University, on March 02, 2013, is a very unfortunate event. Since his death there has been a strong uproar on the part of the student struggle, which protested against the administration’s insensitive and totalitarian behaviour.

While it is impossible to state the exact reasons for the suicide, some things stand out. The suicide could have been prevented, had the administration been sensitive in dealing with Mudasir. What we infer from reports and personal testimonies is that Mudasir and Waseem were ‘close friends’ and roommates in Pune and Hyderabad. When the two were not together Mudasir would question Waseem by asking, “Where were you?” and “With whom were you with?” Over time, Waseem became uncomfortable with Mudasir’s possessiveness and tried to distance himself from Mudasir. This disturbed Mudasir and it also led to physical fights between the two when others intervened and had to separate them.

This relationship between the two did not have a name, and they definitely did not acknowledge it as a homosexual relationship. Given the pervasive homophobia in our societies and academic institutions, where homosexuals are still looked down upon, naming the relationship only riddles it with discomfort. In Mudasir’s case, we see an overlapping of his religious, Kashmiri and possibly queer identities, which position this ‘relationship’ on uncertain grounds, when considering aspects of the private and the personal, love and friendship, admonishment and violence. 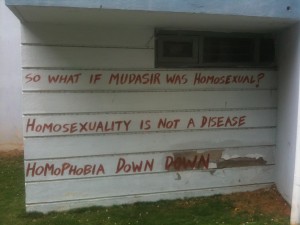 On the night of the incident,  Mudasir and Waseem had another altercation.  When Waseem reported it to the Proctor, the latter asked the police to arrest him on the grounds that he was “mentally disordered”. When some students got to know of these events they went to the Police Station. On seeing the students, Mudasir broke into tears, exclaiming, “Mein pagal hoon kyaa?” (I am mad or what?) It was a group of students and the Warden of the Hostel, who wrote a letter at the Police Station stating that it was an issue internal to the University.

The debate about causes of Mudasir’s death has different versions. One is about him being a Kashmiri nationalist who was tortured by the police, while another foregrounds his Muslim identity.  A number of people have expressed strong discomfort at acknowledging any aspect of Mudasir’s putative queerness while engaging with the issue. Some have even considered referring to his feelings for Waseem as an attempt to tarnish Mudasir’s name.

At this point in time, what is important is how the different aspects of this case are represented and discussed. If we suppress critical elements of this case by refusing to engage with the possibilities of Mudasir’s queerness in a non-homophobic manner, we fail to learn from this unfortunate death, and become limited in our abilities to strategize for responding to similar issues and prevent future tragedies. And his becomes one of the myriad deaths which happen due the callousness of individuals and institutions.

Mudasir’s death teaches us that our sexuality is much more fluid than we think. While engaging with queerness, it no longer is an aspect located Outside, or foreign to one’s context, but it locates itself in the very place one inhabits.  Moving forward, we insist that the university engage with sexuality issues in an inclusive manner,  refuse to allow responses to similar student crises to be colored by institutional homophobia, and offer therapeutic rather than punitive responses to such issues. Such change is essential to prevent future deaths and enable students pursue their academic goals in the knowledge that all aspects of themselves are welcome and affirmed on campus.

Fortunately, some students and queer groups in Hyderabad have shown their solidarity, in protesting against the homophobia of the administration, and urged for the need to engage with LGBT issues on campus. We seek your support in signing a petition in seeking an impartial inquiry in the death of Mudasir Kamran.

Andy Silveira is a runner and a queer story teller with a doctorate in Film Studies and Visual Culture. He is based in Goa.