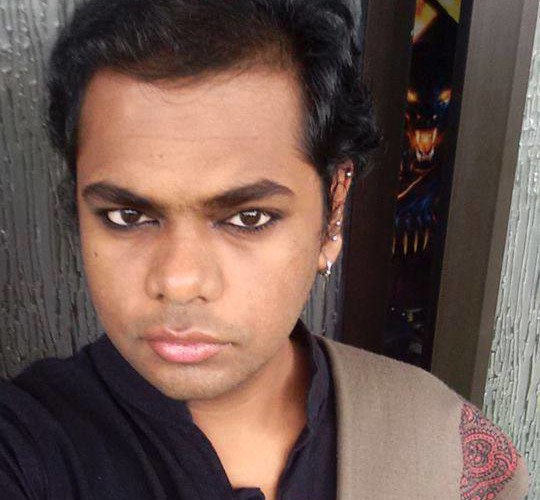 “My mannerisms didn’t fit into the conventional norms of gender expression, which initially led to a lot of debate among family, extended family, classmates, colleagues and random strangers and then escalated to castigation, vituperation and aggression which ranged from exorcism to molestation and rape.

I was sexually abused when I was four by a few extended family members, by a teacher when I was 12 and raped by eight men when I was 13 and it didn’t stop there. I was almost raped in a running train late at night by four-five drunken men in 2013, was molested by a group of policemen in the middle of a road and raped by five men including two policemen in 2014- all because I’m open and didn’t bother to mask my identity, my sexuality, my attire. They assumed that I’m easy and that I’m asking for it. These experiences have rendered me weary, agitated, anxious, dubious, melancholic, strong, bold, vocal, empathetic, sensitive, emotional and sarcastic enough to cut a pompous bitch.

I chose to be open irrespective of what I endured and my past experiences are not going to force me back into the closet, because those very experiences have fueled my confidence. I worked with HIV/AIDS, STI, sexual minority and sex worker’s rights based organizations. I co-founded Chennai Dost and volunteered as a Peer Counsellor for two years. Visibility and coming out is an individual’s absolute and autonomous choice taking into account the environment around them. In a country like India, it’s easy to be visible provided if you’re in a better socioeconomic status but it is a challenge for those who are not and I’m part of that unfortunate crowd. In spite of all these challenges, hypothetically if everyone decides to be out and open, there is a possibility of a social overturn. But it’s a risk, I reckon. The best way to attain visibility is through art and literature. From time immemorial sexual and gender expression across attractions/desires have been depicted, moulded, written, sang, praised, lauded, loathed and critiqued. Many have gathered quite a reputation for their unadulterated and uninhibited expression and more should carry on the legacy of contributing commendable works of art and literature.”

The Visibility Campaign features experiences of people identifying as LGBTQI as well as opinions of heterosexual allies. It attempts to fill a tiny part of the huge gap in LGBTQI representation by featuring the lived experiences of the gender/sexual minority from across the country, regardless of differences. The Visibility Campaign asserts the unique individuality of each person featured. It seeks to shatter stereotypes and broadcast the fact that LGBTQI people have our own strengths, weaknesses and identities, not suggesting this as a way to live, but simply telling that this is how we live.
If you identify as the gender/sexual minority, or as a heterosexual ally and want your story/opinion to be featured on The Visibility Campaign,  write to Queertopia at outintheopen2014@gmail.com. Tell us why you think visibility is important.
More details on Queertopia and the Visibility Campaign!