Why I Walk The Pride 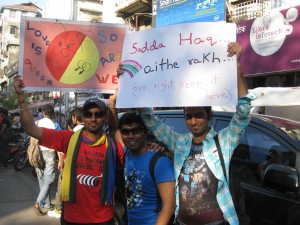 Souvik Ghosh with friends in QAM 2012

As he walked the Mumbai Pride, Souvik Ghosh engaged in a conversation with his friend, who says gay pride is less about gay rights and more about revelry

“What’s the need for all this tamasha?” read a comment posted on one of the Youtube videos of the QAM Flash mob.

“All this hullabaloo about the Pride – What are you guys really proud of? What’s there to be proud of?” read another.

A day later, as I was matching my steps with a crowd of hundreds in the Mumbai Pride, one of my companions, who happened to be as much a tenderfoot in the Pride as me, whispered into my ear, “At least half of this crowd has come here to party.”

“Why do you think so?” I objected.

“C’mon, don’t be so naive! How many people do you really think have come here to support the cause of the LGBT movement? On the other hand, how many are here, to actually flaunt their fashionable outfits, ogle at eye candies and shoot a few darts?”

My friend’s words reminded me of Ashley Tellis, who in many of his articles has  accused the Indian LGBT movement of elitism and of being, at the core of it, as my friend put it, a party, barely concerned about the real issues facing the community.

As the air filled with drumbeats and the jubilant cries of the paraders, a sheaf of balloons rose high above us, gradually dispersing and dotting the sky in the colors of the rainbow, much like the several skeptical and awkward questions dotting the queer movement.

Not that I am a great seconder of Mr. Ashley’s views but I didn’t have a perfect reply for my cynic friend either, who went on, “You know what the biggest paradox within the queer community is? That we ourselves believe we are queer. When we do that, somewhere we concur with the notion that we are aberrant and outlandish. Is that what we take pride in? Being outcasts?”

“Absolutely not!” I retorted.

“Neither. I do not take pride in my being gay, just as I wouldn’t in my being straight, had I been so. Nor do I take pride in being a sexual minority, as I would in being a member of some erudite society. But I do take pride in winning the battle of acceptance with the self, in the face of an inconvenient truth that I belong to a lesser kind, perceived by the greater other as evil, unnatural and diseased. I take pride in that I am not miserable and full of hatred for myself when the world at large expects me to be. Ask me why that is particularly brave of me? I would say, ‘It’s not easy to be one in ten, in a world where the definition of normal and abnormal stems from mere statistics.’ Add to that the fear of religious and social ostracism which one has to overcome.”

“In order to answer a question like why there is a special need for something like the Pride,” I continued, “it is important, that we do not forget that our sexual preference is not the only factor that differentiates us from those curious, sometimes smiling, at times sympathetic and mostly reproving onlookers. There is nothing glorious or shameful in being a heterosexual either, but at the same time, their right to sexual fulfillment, and I dare say love, will never be a subject of debate in a court of law.” 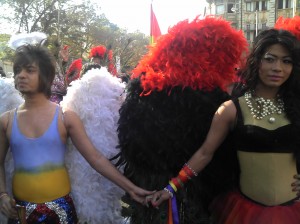 A moment’s silence followed during which my friend, however cynic an avatar of Ashley Tellis he is, had his eyes run their routine in a ‘typical gay scene’. His disappointment, in looking at a few sculpted blokes, with their seemingly sugary faces hidden behind masks, probably led him to his next question.

“Don’t you think that our demand for social equality falls flat on its face when some of us walk the pride in masks? What claim to dignity can we have with a veil of shame on our faces?”

“May be we cannot, but I guess that’s also what, in a way, we are fighting. The Pride is not merely a demonstration to those from whom we seek acceptance. It’s also an endeavor to inspire fellow queers to shed their fear and inhibitions and stand up for their rights.  The presence of the mask is as much a reality of the queer movement as its gradual diminution every year. It’s only symbolic of the inner struggle that each of us are desperate to end. So, I would rather have those hundred masked faces walk together hand in hand on the day of the Pride than sit in the isolation of their homes, nonetheless, in masks.”

“But do they really appreciate what they are here for? How many walking out here do you think really know about the Stonewall riots?”

“Probably not many, but why is that a bother and why should it anyway be necessary for someone to know about the history of a movement in order to join a movement? I think what’s essential for us, is to know what we are standing up for.”

“But it makes no sense to be a part of something in total ignorance of how it all started?”

“Whoa! You sound as if the Stonewall riots were some big bang event of some sort which gave birth to the first ever homosexuals on earth from whom we all descended! Our history hasn’t evolved us into what we are. It’s just that we have a history which runs deep into time. But, not knowing about it doesn’t mean that one doesn’t care.”
“Accepted. But, explain to me – Why doesn’t the solemn resolve to fight for social freedom reflect in the manners? Why does it have to appear a fancy dress party or a fashion parade?” asked my friend, circling back to his original zone of discomfort.

“The answer, my dear friend, lies in your question – the right to innocuous free will. The breaking of any social barrier, historically, has been marked by manners bespoke and embarrassing to the moral guardians. But society has transcended. There are things in life you wouldn’t have as easily appreciated as you do today, had you been living in the medieval era.”

“However, you have to agree that the soul of the movement is not as widely appreciated among the paraders as it should be. So finally, at the end of the day, it’s nothing more than a ball for all of us, jolly paraders, and a much desiderated media footage for the activists and celebrities.”

“Which according to me is a bit too harsh an observation. Any movement celebrates its successes and so may we. But I do agree to the need for responsible leaders to guide the masses in the right path.”

“And do you believe we are walking the right path at present?”

“I don’t know. But, what I know is that, no fight for a cause which is common to a section of people has a meaning without the people uniting, even if in ignorance. Look around you. The Pride, how much it appears to be a party on the streets, with its exuberant flamboyance and insensitive boldness, has done that. And that’s precisely why we are here.”