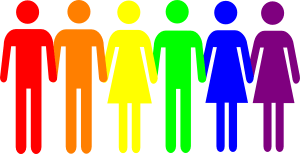 The word ‘love’ might enhance the existence of human beings in every given society and culture, despite the background it exists within. From one religion to the other, from one region to the other, from one culture to the other, from one society to the other–all these parameters seem to be insignificant when one thinks of love. If any given heteronormative society is taken, from the largest unit to the smallest of the social structure, love had been existing within the domain of physical, mental, and divine parameters of all these units of the society.
Let’s first see from the largest unit of the society–the state. In a diversified country like India, love among human beings, despite their gender, state holds very significant positions. Since independence, the orthodox heteronormative state boundaries invaded the human psyche. It relates to several factors of existence –like the caste, creed, sex or gender, religion, etc. Unison of love between two individuals of two different states was once not acceptable, but gradually with changing scenario of a given society it finds its way of acceptance. So today, the caste and creed factors are overruled by this contemporary society. There’s no hindrance of acceptance between two individuals, say a Tamil and a Kashmiri, or a Gujarati and a Bengali.

Now when it descends to the other unit –the community -the heteronormative social structure is still rigid on that front. Within the same state, inter-religious marriages are withheld. The unison of love between a UP Hindu and another UP Muslim still has to face rejections from the orthodox psyche of the social structure. The individuals are either ostracized from their community or have to escape from their immediate society and take refuge somewhere safe. The unison of love between two different communities or religions still has to fight and confront struggles to get their love accepted in any heteronormative society of this country.

When the other unit, i.e. family, below it, is probed into, we find responses vary. Some family might accept even inter-religious or inter-community unison of love of two heterosexual individuals, and some might feel it to be a blasphemy. This happens because of the dominance factor of a particular family. If the family is closely knitted within the grid of community, they will follow what the community wants. And the other reaction is also noticed. Very interestingly, the class structure of the society prevails here. In an urban set-up, the viability of economic inter-dependency is focused upon. Same with the rural background, but in some parts of the country the community reactions still prevail when matrimonial alliances are to be held.

Amidst all these parameters the individual loses the voice of its own. They do not exist anywhere. And so do gender and sexuality–as they have to succumb to the immediate needs of the family first and then community and lastly the state. We are far beyond a congenial society where individuals have a voice. It still exists in a utopian world. Therefore the most rejected and unacceptable become the individuals who identify themselves with the LGBT community. Laws are stringent, society is orthodox, and family gets paranoia thinking about the individual’s decision of accepting themselves with whatever gender they might belong to.

Let us take the example of gays in a society. An individual might have a choice to accept himself. In his personal space he might enjoy his life more independently, but when the family space is taken, the reaction of the individual varies from one to the other. Some individual rebel, some feel safe to be with the family’s decision, some get subjugated, and some overpower their families. Now when it comes to the individual or personal space, many take shelter under the family’s refuge and prefer to be closeted than disclosing their sexual identity. But there are many individuals who have disclosed their sexual identity and behaved accordingly. If the family accepts, it is considered to be ‘lucky charm’; but if the family rejects, the individual might rebel and take the easiest form of revolt –the escapist tendency. In simple words, the individual will prefer to move out from the immediate family space or place to another unfamiliar space or a new place. Then explore the viability of one’s sexuality in wide spectrum. If all the facets of this smallest unit are probed, it can be concluded that it’s the decisive factor of one particular individual –whether he accepts himself as a gay or not.

Very interestingly this also has three different levels, the physical, the psychological and the ephemeral. On all the three levels, according to social structure, the power dynamics play the pivotal role. If physical is considered, the highest level of gratification for someone might be only receiving oral sex, someone might only enjoy getting penetrated, and so the wide range can be carved out. But when psychological level comes, some feel that gratification is only in foreplay, for some only in ejaculation, for some it might be the after-play. But for ephemeral level, it’s hard for even individuals to be bonded at the platonic level, because the individual space doesn’t allow that as the power game fails to exist there. Paradoxically, this level is much more acceptable by most of the social structures. Two guys can be together like friends or live-in partners without sexual part being there, and consider themselves as platonic lovers. Such love is acceptable as religion allows the orthodox thought to be cognizant when this bondage exists. But when it comes to contemporary society, individual acceptance of physical is justifiable but not the psychological level, as if gay relationship doesn’t exist at all. On physical front, one gay might enjoy sexual encounters profusely, but at a psychological level, the same man might not agree to share his personal space with another man.

Henceforth, love has perished between the sheets and left with stain marks upon them and nothing beyond. Psychological level clashes of identities are prominent. Platonic love hardly exists. To sum up my argument of rejected love, just think when a gay man himself is not ready to accept his love, on all grounds, how will the society give them acceptance? A gay man whether closeted or open about his sexuality cannot come to terms with his own self, then how will the family accept him? We claim that we are much more open today; broadmindedness is prevalent in our society, then why when one’s brother confesses about him being gay, he is manipulated emotionally? All gays seek long-term relationship, ever-lasting love, then why after few weeks, or few months the love affair perishes to exist? Is it then we gays are looking for an easy way out? Or experimenting from one form to the other, whichever is suitable, we try to fit into that armor? Probably you as readers can find some solutions to fit into any social structure.