The Third Voice in Pakistan’s Elections 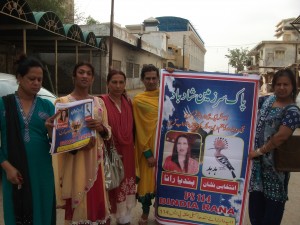 Pakistani transgenders campaigning for their candidate

Sachin Jain reports about transgenders contesting the elections in Pakistan

In a part of the world where religious ideology and centuries-old traditions often seem to be at loggerheads with the ways of modern democracy, fighting established political parties with deep pockets and a lot of clout seems like an even more uphill battle for these independent hijra candidates. But they refuse to be cowed down. They believe that their mere candidature takes a stand  for equal rights for everyone in Pakistan.

Their lack of funds necessitated very down-to-earth campaigning strategies: door to door visits, and an engagement with basic issues: digging sewage canals, paving bazaar streets, electricity, gas, water and soaring prices. This development-focused electioneering culture is also what many in India are clamouring for, fed up of votes sought on divisive bases like religion or caste. In Pakistan, too, this focus on development is struggling to assert itself in a debate that often gets dominated by ideology, religion, dynastic politics and the baggage of history.

Khwaja Siras also appeal to both a voter fatigue with the status quo, and a latent desire to break rigid binaries. As they tell voters: “Since neither men nor women have solved your problems for decades, we humbly request you to give us a chance”. Unwittingly enough, the extreme polarization of rigid societal gender roles between men and women has led to the ‘third gender’ being ascribed a midway point of ‘neutrality’, and even ‘objectivity’. Though they hold a visible place within local religious and cultural traditions, the daily discrimination, ridicule and lack of education that they face makes one wonder how successful this marginalized community can be in the face of jaati- and biraadari-based vote-bank politics.

They are sometimes patronized, and made fun of, in sections of the electronic media, for their inability to articulate informed positions on issues of national import like terrorism and foreign policy. The tendency is to treat them as an endearing if not serious side-show amid the oft-dreary heat and dust of sub-continental electoral politics. However, frustration with the impunity of the ruling class, and the apathy of the educated elite, has meant that the public is giving them an increasingly sympathetic ear. But will political parties take them seriously? None of them even mentioned the 500,000+ transgender community in their manifestos. Fighting provincial and national elections seems like taking the first baby steps towards enforcing change from within a hitherto-oblivious political system.

The LGBT community’s relationship with electoral politics has been complex and difficult everywhere. Due to overwhelming hetero-normative and patriarchal systems, achieving comfort as a gender or sexuality minority has invariably meant distancing oneself from the mainstream.  However, political engagement requires precisely the opposite –a negotiation with the very system that queer people often turn their back on. Yet, the last two decades has seen astonishing successes – like that of Jóhanna Sigurðardóttir, the world’s first openly lesbian head of government who became Prime Minister of Iceland in 2009. Within the trans community, Georgina Beyer became not only the world’s first transsexual mayor in Carterton, New Zealand, in 1995, but also the world’s first transsexual Member of Parliament in 1999.

In India, hijras were officially recognized as a “third sex” in 1994. They now have the option of identifying as Eunuch “E” on passports. However, up until now, both in India and Pakistan, candidates were forced to identify as either ‘male’ or ‘female’ – resulting in the disqualification of hijra candidates in elections in 2008 and 2009. Encouragingly, there has been progress –the government of the south Indian state of Tamil Nadu established a transgender welfare board in 2008, to look at a wide range of TG rights issues including inclusion under the census, college admission forms, food ration cards etc. Indian electoral politics too, is no stranger to hijra candidates. Shabnam Mausi (Shabnam Bano) made history in 1998 by being India’s first hijra to be elected to public office. She won from the Sohagpur constituency in Shahdol-Anuppur district, she served her term in office in the Madhya Pradesh legislative assembly till 2003.

These winds of change are now blowing in Pakistan as well. One Khwaja Sira candidate in these elections who typifies this positive and 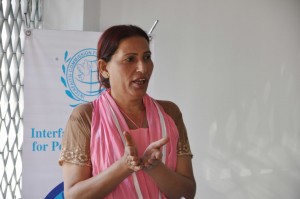 Bindiya speaking at a conference

optimistic attitude, is Bindiya Rana. For the last five years, she has been a founding member and President of Gender Interactive Alliance, Karachi. It is an organization working in the area of HIV/AIDS awareness and outreach and equal rights for Pakistan’s transgender community. Intelligent, poised and articulate, Bindiya talks about the unique turn her life has taken, thanks to contesting the elections, with candour, pragmatism and a disarming sense of humour. Any hint of condescension that a sceptic may have about her, on account of entrenched biases about hijras as mere singing and dancing caricatures, evaporates on listening to the informed stand that she takes on local development and policy issues.

Born in Lyari, Karachi on August 14, Bindiya is the third-eldest in a family of 7 sisters and 4 brothers and studied till Class 8. “My family had an idea about my gender from the very beginning. They were very concerned that I should not get on the wrong path,” she says, recalling how she used to like wearing make-up and dressing up as a girl as a child. On one occasion, her teacher grew angry because she thought that Bindiya was mimicking her lachak (‘swish’) while walking!

While in her teens, she joined her guru and became her shagird (disciple). “I would go with my guru to weddings or when children were born, and sing and dance, and take “vadhaaiyaan” (money given on auspicious occasions). When I went to search for work, people would look at me and laugh. I would say to myself, “How do I explain to these people that I too am normal, just like them?” she tells.

Bindiya is contesting the Sindh Assembly elections, being held with the Pakistan General Election on May 11. Her constituency PS-114 consists of Azam Basti, Akhtar Colony, Kashmir Colony, Defence View, Manzoor Colony, Mehmoodbad, Ashraf Colony and Chanesar Goth. Roads, drinking water, proper sanitation, schools are some of the things on her agenda. “I myself am a part of the lower class of society always struggling to make ends meet. So I understanding people’s problems and have helped them, unlike politicians who come once to ask for votes and then don’t show up again,” she says. She hasn’t forgotten her own community of Khwaja Siras either. “As a Khwaja Sira, I would like to see the Supreme Court orders, languishing for 5 years due to political inaction. This would ensure progress of my community.”

Bindiya knows that there are many challenges she has to face. The first one she overcame when her nomination papers were accepted, after having been rejected earlier. “The reason given (for rejection) was that I had not submitted my original passport and identification, however these were with a travel agent at that time. I challenged this in court. They accepted my position and upheld my nomination.” Her fellow Khwaja Siras are supporting and campaigning door-to-door for her. The response of people, especially women, has been encouraging. 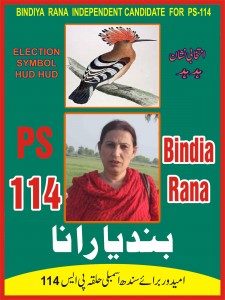 Bindiya says she will continue to work for her constituency even if she loses the election. She looks up to Mother Teresa for her humanitarian work. “Just as she had spent her entire life serving others, I too would like to follow in her footsteps.” To the transgender community in India, her message is “Come, let us all raise our voice together for TG rights. Let us pay attention to our education, so that we do not remain backward in society. Do not lose courage, keep on the struggle for your rights. In our countries, two big challenges for the transgender community are lack of education and unity. But the biggest problem is getting rid of attitudes entrenched over centuries. We need to end this discrimination so that people see us and treat us as equally.”

To her nay-sayers, she says,

[“Don’t be frightened by these raging winds, o eagle!

They only blow to make you soar even higher in the sky.”]