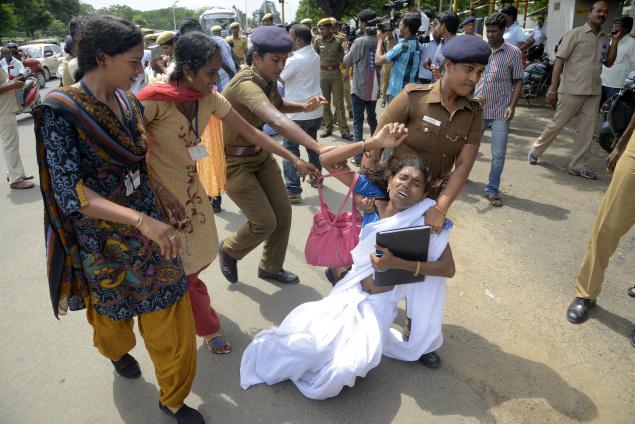 Transgender community in Tamil Nadu alleged ill treatment and harassment for having gone to raise their voice against fundamental discrimination in the first place. At Valluvar Kottam, a group of transgender people, who came to demand reservation in government jobs for the community, was barred from holding a protest and was assaulted and harassed by the police, reported The Hindu. They had come to the Secretariat to submit a letter, containing their claims, to the Chief Minister and were planning to hold a protest for the same later. However, everything ended on a bad note.

Transgender people across India have always faced discrimination of different forms. Denial of the right to work has been the most widespread and common discrimination for them. On top of this denial, what was more saddening was the way the police dealt with them for staging a democratic protest. They were even taken to the police station and detained. Bhanu, a computer engineer by qualification, one of the protesters there and said, “So, at 10 a.m., we went to the Secretariat hoping to give copies of the letter to officials. Instead of letting us meet the authorities concerned, we were dragged by the hair, assaulted and taken to the Kothawalchavadi police station. And, when we tried to let the policy-makers know our problems, we were assaulted. Sadly, even the female police personnel treated us like a nuisance.” The Hindu reported that they were released later at 7 in the evening.

Speaking on the plight of the much neglected transgender community, Swapna, an IAS aspirant and a BCA by qualification, threw some light on the kind of discrimination they continuously face while applying for government jobs in India. Swapna said, “I have been trying to write the civil services exam for several years, but I am being denied permission. They don’t let me attempt the exam in the male or female category, and there is no ‘other’ category, either.”  According to Swapna they wanted to draw both public and government attention by sitting on a hunger strike  at Valluvar Kottam.

However police claimed that they were trying to raise slogans and causing disturbance. “The Assembly was in progress and they were causing a disturbance. We were only trying to maintain decorum.”