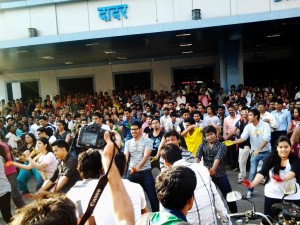 Commuters at Dadar East station in Mumbai were in for a surprise on Friday when a group of 30 people with coloured palms suddenly started dancing to Bollywood songs. The flash mob, which happened around 4:40 pm at Dadar East station, was the 2nd gay flash mob that the city witnessed and is part of the pride week celebrations in Mumbai.

Learning lessons from last year’s flash mob, when extensive media coverage beforehand had robbed the flash mob of the surprise element, this year the venue and details were kept a secret. Participants had their hands coloured in six different colours, representing the rainbow flags and danced to a mix of Hindi and English songs- Vele (Student of the Year), Tum Hi Ho Bandhu (Cocktail) and Starship (by Nicky Minaj). The performance, which lasted for a few minutes, ended with the participants shouting slogans like “If you are a Homo and you know it, then say Homo” and “If you are Transgender and you know it, then clap your hands”, before they dispersed in the crowd.

Speaking to Gaylaxy after the flash mob, Nakshatra said, “The crowd was excited as to what was happening. Some thought it was a film shoot going on. We also tried to interact with the crowd before joining the dance. Our target audience was the general public, and at the station, we could reach out to a lot of people. We were satisfied with our performance. The hard work of over 2 months paid off.”