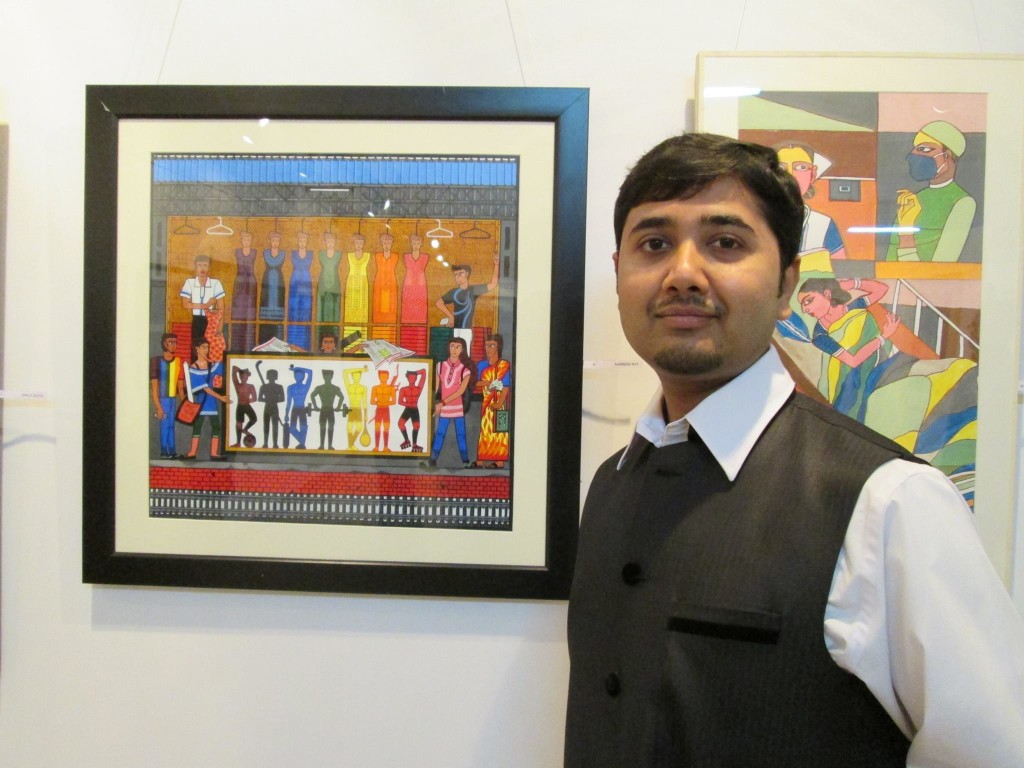 Anirban Ray and his painting

“And I wait there, gazing into the emptiness…”

People belonging to the entire spectrum of existence, have their morsel of gazes, as they gaze with aspirations into the vortex of the surroundings, flocked by the imprints of ‘perfect’ human appearance. Mr. Anirban Ray, painter (and Assistant Professor of English, Presidency University), captures the entire spectrum of sexual preferences gazing in anticipation of their aspiration, in his canvas, in the form of his painting titled ‘Gazes’, an acrylic-on-cartridge work.

The painting is done is the mural style with Acrylic, which makes the painting very bright, and appealing. The center of the background shows a line of mannequins, dressed in night-wear, thereby symbolizing the form in which every man would like to see his woman. The conflict is between ‘seeing’ and ‘gazing’. The mannequins are guarded on both sides by two male figures, the one on left fondling a woman’s dress. This is the bisexual man (symbolized not only by the fondling, but also by the thin moustache, and subtle eyes), who has his share of ‘gazing’. The man on right is an attitude-filled straight man, with a goatee, and he is staring ‘into’ the mannequins, his gaze giving him pleasure.

The foreground presents a scope of an even more exciting discussion. The center shows a canvas that has been turned towards the viewer, to present to their gazing a painting (or, shall we call it a meta-painting?), which shows an array of semi-clothed male models (sportsmen, to be precise), in perfect alignment to the mannequins. Mr. Ray has been intelligent in choosing the sports in such a way that figures opposite to each other have the same posture, just the instrument varying. This is an excellent show of intelligence and experimentation on the artist’s part. This is how a woman would like to see her man, the sports being a symbol of overflowing masculinity. The canvas is guarded by many figures. 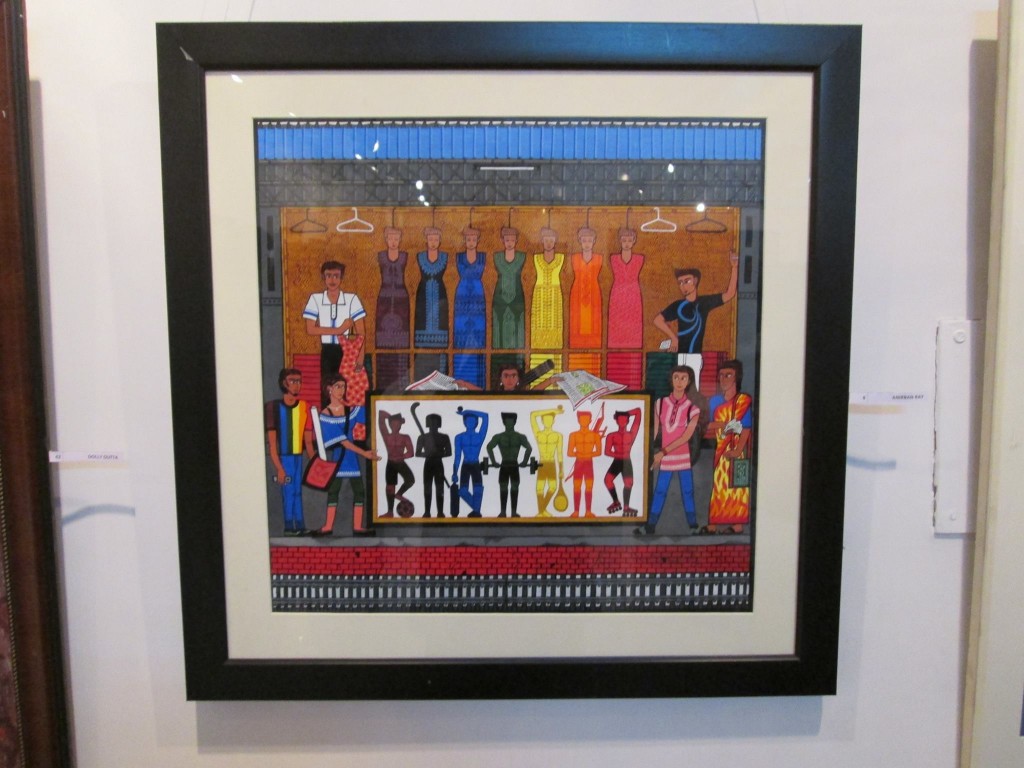 The first figure on the left, holding the canvas, is a lesbian girl, in her tomboy-ish attire, seeing the painting, yet not exactly gazing into it. The second figure on the left is that of a homosexual man, in his rainbow clothing, gazing straight into the (meta-) painting, deriving his dose of pleasure out of it.

The first figure on the right is that of a straight woman, who, like the gay man is gazing into the painting. The second figure on the right is a very interesting projection, that of a eunuch. The eunuch, in a very heteronormative way, shouldn’t have any sexual preference as such, but is still gazing right into the painting, trying to dissolute the melancholy of dissatisfaction, and hence, deriving his dose of pleasure.

The painting is an excellent piece of art, where the artist has represented the entire spectrum of varying ‘gazes’. The painting has been selected by the Academy Of Fine Arts for its annual exhibition’15, and has already been exhibited there.

We wish Ray a splendid artistic future, so that he may paint even better paintings, where the viewer wouldn’t be able to not gaze at the painting in absolute appreciation.

While he works magic on his canvas, maybe we can think a bit on this question: Can a person’s gaze be a revelation of himself?