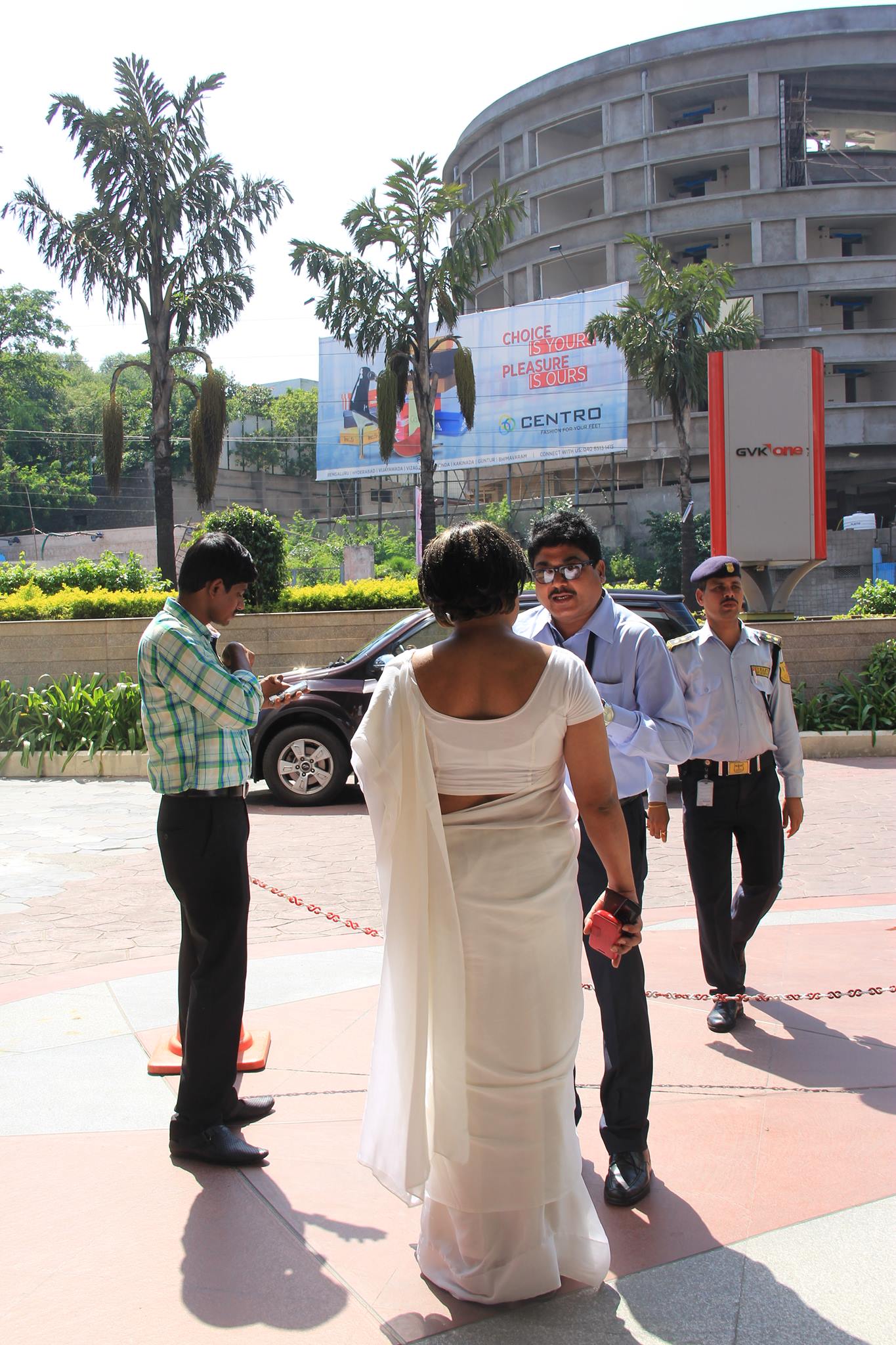 I, Vyjayanti Vasanta Mogli, a 36 year-old transwoman along with another sister Hijra transwoman, Madhumati, was publicly disgraced and humiliated on Sunday, 27th September, when I went to watch a queer-themed film Time Out scheduled at 2.30 pm at GVK mall. Some friends from Queer Campus Hyderabad and Hyderabad for Feminism (relocated) posted about this matinee show and we were happy to join them. My friend Shyam Konnur, an LGBT rights activist who lives in Pune, was in town and my friend Puja Chauhan, an artist and sculptor joined us. By 1.45 pm we were at the entrance, the large portico of GVK mall and were about to join one of the two queues at the ticket vending counters.

At that stage, a man drew close and yelled, “Yahaan kyaa kaam hain tumlogon kaa?”, “Kyon aaye yahaan?”, “Kyon khadey hoo yahaan?”, “Hato yahaan sey” etc. (What work do you people have here? Why have you come here? Why are you standing here? Get out!) Although we heard him, we initially thought that he was yelling at somebody behind us and we did not respond. He came closer and yelled again and purged a slew of invectives like “Tum jaisey log yahaan nahi aasakthey!”, “Nikloo” etc. (People like you can’t come here, get out)

This time we knew that he was screaming at us but as he was a stranger, we ignored him. On being humiliated the third time with similar slurs and insults, I responded in the same language as his i.e. Hindi and said, “Aap ho kaun aur hum aapko kyon jawaab den?” (Who are you and why should we answer)

To this he flashed his tag and said, “Hum yahaan ke security manager hain. Hamaaree zimmeydaari hai zaroorat padney par sawaal karnaa. Tum bas jawaab do.” (I’m the security manager. It’s my responsibility to question when needed. You only answer.)

His response was: “Woh sab tumey bolney ki zaroorat nahi hain. Tum sirf hamaarey sawaal kaa jawaab do. Hum kisee ko bhee shak per sawaal karsakthey hain. Tumhaarey jaisey log yahaan nahee aasakthey, yahaan aakar na jaaney kyaa karogey!!” (You don’t need to say all that. You only answer me. I can question anyone on suspicion. People like you can’t come here. Who knows what you people will do here.)

This was the last straw. He was clearly insinuating that he took us i.e. Madhumati and I, to be dhandheywaali baazaaroo hijra aurathein!! My friend Madhumati is a Hijra transwoman and she felt very very insulted, pained and publicly besmirched and so did I.

I told him: “Aapko patha bhi hain key aap humaarey maanav adhikaaron kaa hanan kar rahey ho!! Sarvochh nyayalay ney samvidhaan key thehedh humey NALSA vs. UOI phaisley key zariyee…” ( Do you know you’re violating our human rights. Supreme Court under the Constitution has given us via the NALSA vs UOI judgment…) and at this stage he almost barked at us, “Abbey chhup.. hat yahaansey!!”.(Shut up and move out)

He bulldozed and rode roughshod verbally over us and it was appalling to be treated thus.

When we made plans at 11 am that day to go the film Time Out at INOX of GVK mall, my sister hijra Madhumati was apprehensive and reluctant of any such unsavoury incident. At this stage when the security manager was treating us thus, she said, “Akka, nenu meeku chheppanu kadaa ilaagey authadani ituvanti pedda pedda chotlaku velthey. Neynu bhayappaddattey aiyyindi.” (Didi, I told you that we may face such problems as transgender people if we go to these plush places. It actually happened just the way I feared.)

Having engaged with him for 10 long, gruelling and humiliating minutes in Hindi, I switched over to English. I said, “Do you even know that you are violating the NALSA vs. Union of India judgement of the honourable Supreme court by thus publicly disgracing, creating a public nuisance, besmirching and demeaning us. GVK can be held liable for civil defamation, discrimination, mental trauma and torture, humiliation and under civil tort remedies.”

On hearing me speak in English, the security in-charge looked perplexed and stunned. He thawed from his curt, frosty and offensive language and said, “Hum aapko KUCH aur samjey. Aap galat naa maaniyegaa. Aap misunderstand mat karo.” (I thought you were someone else. Please don’t misunderstand.)

He clearly expected us to be dhandheywaali hijra aurthein. Well, even if we are, is that any reason to exclude us from being part of our Indian economy? We are both equal social and economic constituents and an inalienable part of both our society and economy. We have a right to purchase anything under the sun from a movie ticket to anything and everything that is within our economy. This act of GVK excluded us from our very own Indian economy and we call out this act of socio-economic exclusion, public humiliation and public nuisance.

We have been very upset and traumatised after such hostility and humiliation. I couldn’t believe that as customers we were treated thus. It took me time to take time off my busy schedule to write this. But then, having thought about it enough, I don’t think it is the fault of the security person in the lowest rung of the organisational hierarchy as it is, to my mind, the failure of the senior leadership of an extremely affluent and a successful brand like GVK. I understood that day after conversations with some of your employees (whose names I don’t think I need to reveal) that most of your staff are not trained to effectively handle such incidents that involve respecting diversity at work place.

Transphobia is endemic in our society and I don’t wish to only blame those poor working class and wage earning security staff who were raised for decades in a homophobic and a transphobic society and were very convinced that they were doing the right thing. I can imagine how strong and stratified the transphobic indoctrination of a lopsided value system could have been in their minds. It led to them behaving thus with a customer purely because she incidentally happened to also be a transwoman.

I write this not to complain against the behaviour of those untrained security staff who are perhaps your vendors and are at the lowest rung of the organisational hierarchy. Instead, I write this to clearly call out business leadership deficit and HR policy and practice vaccum at GVK. I was enormously disappointed to know that a leading brand like GVK with airports and malls hasn’t invested judiciously in learning and development and hasn’t put strong HR policies and robust HR practices in place to preclude such unenviable situations.

In today’s age and time of customer centricity, globalisation and liberalisation, if this was the experience of a customer at GVK, I can’t imagine what the plight of a transgendered employee would be at GVK. It may very well be a nightmare. Through this open letter I wish to encourage you both, Mr. Sanjay Bhansal as the General Manager, GVK and your HR leadership to build and a nurture a culture of respect for all individuals at all GVK regardless of their gender, gender identity, sexual orientation, caste, class, religion and any other form of social exclusion.

We demand that GVK issue a public written apology through mass media as the disgrace and humiliation to us was public at GVK. GVK as a brand is global and has advertised widely to be a leading brand with competitive business practices. We also demand that GVK come clean with its people and HR policies and practices and come up to speed with the NALSA vs. Union of India judgement of the honourable Supreme Court of India.

Attached within are both the NALSA vs. UOI judgement and the Rights of Transgendered Persons Bill 2014 passed by the Rajya Sabha being considered by the Lok Sabha. We appeal to GVK management to include and not exclude transgender people as people i.e. both as clients, end customers and most importantly as employees to be truly inclusive and non-discriminatory.