I was sitting in a circle with about seven other teens, our legs resting in a plastic tub of water. It was summer. I was twelve or thirteen, about to enter high school the coming fall, and I didn’t shave my legs. I didn’t know how! My mom thought it was a stupid idea, and I didn’t really care one way or another—except that I wanted to blend in just enough to avoid stares and hurtful comments. That meant I should not have hairy legs.

“Zoey!” said one of the older teens suddenly, “Do you not shave your legs?!”

I managed enough self-restraint not to flee from the scene immediately, but I never again sat with the others to cool our feet in the ice bucket. Even in this otherwise rather more inclusive and diverse drama group I found myself feeling dorky, ugly, awkward, sad, abnormal.

We were performing Shakespeare-riff skits at an arts festival, and after that exchange, not only did I feel ill at ease, but I lost a feeling of community and the support that can characterize these groups.

Everyone I know experiences similar moments of exclusion, alienation, disconnection, loneliness, and often bullying in their lives. And—let’s be real here—it feels terrible. The visceral memory can leave lasting marks on one’s psyche, and in the future affect physical and mental reactions to certain types of events, or triggers.

Most importantly, these periods of loneliness, self-doubt, sadness, and even self-hate, can be debilitating and dangerous.

Certainly, many communities—LGBT, queer, and others—try to cultivate inclusive attitudes and to create support networks in order to ensure people going through difficult periods find support and feel held. And yet, communities also often define themselves by what they exclude and by what they disagree with, denigrate, and consider second-class. This defining of out-groups seems a nearly inevitable part of group-forming, and yet I believe that it is important for groups to consider who they are excluding, how they are doing it, and the effects it has.

Particularly, consider who ends up on the margins of a group because of their affiliation or similarity with whatever—in formulating a group identity—is defined as NOT the group or as counter to group beliefs/ethics/identity/practice.

Get on Grindr or Planet Romeo and you will see variations on a theme: no fats, no femmes, no CDs (crossdressers, though of course this is also a transphobic comment), no uncles. Anyone who isn’t a masculine, exceptionally fit, young, cis gender man is thus cast into a second-class position within the dominantly gay “((l))G(b)(((t)))” community that populates Grinder and PR. Anyone who doesn’t fit the criteria can feel utterly excluded and discounted as a possible lover, object of desire (hookup), or even friend. 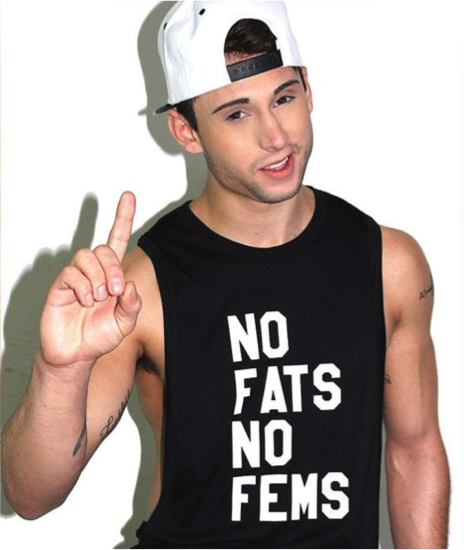 Yet how many people really fit all those criteria? And is that really all anyone is attracted to? Really? We are, of course, taught that we should be heterosexual, taught that we should be cis gender, taught the certain ways men and women should behave. Yet many in lgbt/queer communities have un-learned these lessons. Are unlearning. Maybe we can also challenge what we’re taught “should be”—or “is”—attractive or valuable.

I am far from the first to point this out. Discussions I see in various forums and meeting spaces on- and off-line indicate that hierarchies of attractiveness are challenged. Less challenged, however, are the sometimes stridently judgmental-seeming expectations that some communities have about the political perspectives and degree of involvement that individuals ought to have.

A friend who was for a long time very active in Indian queer/lgbt communities skyped with me after a several-month recess from involvement with any communities. Although previously very engaged, political, and radical, this friend told me that they had become fed up with the narrow and strict expectations they saw in pockets of queer/lgbt communities. Political engagement is crucial, of course. However, this individual were concerned about the expectation that everyone should hold left/radical/progressive views and engage in related activism.

This friend saw people who were not very political, or who were moderate, or who were politically right/conservative put down, censured, and excluded for their politics and (non-)actions. These people tended to be criticized and excluded from queer/LGBT communities with different political views. My friend was worried about the effect this would have on these individuals’ wellbeing.

I myself can struggle with the issue my friend raised: I try to be engaged politically (while working to mind the ways I may affect or take up spaces), and I think that a progressive/radical/left-ish political orientation is more consistent with creating space and possibility for queer/lgbt lives. Honestly, I am frustrated by queer/LGBT people who support right-wing causes, because it feels like they are blackmailing themselves, me, and everything that might help ‘our’ lives become less dangerous, more equal. So, just as they feel threatened by me (or by my criticism/exclusion of them), I also feel threatened by their views.

On a different level, some people new to queer/LGBT spaces may, simply, not be ready for activism yet. Ought we not give them time and support to grow and find their niche?

Fundamentally, I don’t want anyone to feel like I did when I didn’t shave my legs and therefore felt I had to avoid the heat-quenching ice bucket to avoid being told I was “gross.” I don’t have any solution to the tension I am raising here, and I hope to prompt some discussion. What do you all think? I understand that right-wing or even a-political attitudes/people can feel threatening, and present a danger of undermining queer/lgbt liberation work. And yet…to me it feels so important to include people with a broad range of perspectives (political and otherwise), for two main reasons (that I can identify).

So (how) can we include and provide support to people, even if the person holds perspectives that we—strongly, perhaps—disagree with?

Zoey
Zoey is an always-attempting-to-be inclusive feminist, anthropologist empath, malcontent with a penchant for Foucault and ice cream who is inspired and intrigued by the word 'outre,' and the acts, attitudes, and affects it might inspire. She earned her B.A. from Pitzer College in "Psychology, gender, and sexuality in social contexts." Zoey hopes to continue research into mental health of LGBT+/queer individuals and communities in India, which she began through a Fulbright-Nehru scholarship in 2014-15.

Latest posts by Zoey (see all)