Hatred is not Divine 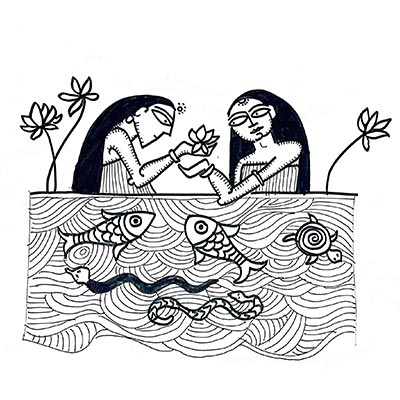 The idea of Judgment Day (qayamat, in Urdu) is not found in Hinduism, or Buddhism and Jainism, for that matter. It’s found in Abrahamic mythology and even in Greek mythology, in mythologies that believe in one life; hence believe there is a right way to life that one single life. Hinduism, however, is based on many lives. So there is no such pressure, no concept of divine judge or rulebook. So when someone says that homosexuality is not ‘approved’ by Hinduism, they are missing the whole point of Hinduism. Hinduism is based on karma. You cannot but express the fruit of your past actions (karma phala). If you are supposed to be gay, you will be gay. If you are supposed to be transgender, you will be transgender. The question is will society support it? Our choice of action can be either rooted in love, or hatred. That is in our choice. Exclusion is not love.

In Abrahamic mythology, God is decidedly masculine. In Hindu mythology, God is simultaneously formless, rock, plant, animal, masculine, feminine, and queer. Queer examples include Shiva who becomes a milkmaid (Gopeshwara) to dance in Krishna’s raas-leela, Vishnu who becomes a damsel (Mohini) to enchant the gods and demons, the Goddess who fights a war with an army of goddesses, and then shifting forms to become demure wife and affectionate mother. Depending on our emotional and intellectual growth, we choose the God that most suits our disposition. Maturity is about allowing others to worship Gods of their disposition. There is no ‘one’ way for all. Different gods, for different people with different tendencies and disposition. But they are all forms of the same God. This is unity in diversity.

In the Gita, everything in the world is natural, born of prakriti, an outcome of the three natural tendencies: sattva, tamas, and rajas. So the concept of ‘unnatural’ itself is against the Gita, an idea introduced by the British that many Indian politicians have adopted. The whole point of the human mind (purusha) is to expand itself in love to include the myriad manifestations of prakriti, as Vishnu does, not withdraw from it as Shiva does (until the Goddess changes his mind) or control it as Brahma does. Brahma, who seeks to control the world, is beheaded by Shiva, and therefore not worshipped.

The modern liberal Western world has rejected religion because it saw religion as oppressive and controlling (though that is being entirely unfair) and so seeks approval of homosexuality as triumph of rational thought. There are many verses in Abrahamic mythology where love triumphs over hatred, and inclusion is valued over exclusion. Religious leaders avoid this for it denies them the power to exclude and oppress. Just as many left liberals exclude and oppress Hindus by the practice of Hinduphobia by pointing to the worst in Indian tradition and attributing all things good to the British or to Brahmin ‘imaginery’ or Right Wing propaganda.

On a relative scale, unlike most parts of the world, India has been most inclusive and diverse, perhaps due to the underlying Hindu ethos (though this is hotly debated). We have to choose whether we want to continue to be inclusive and diverse, or simply exclude some colours of the rainbow flag. The seeds we sow today will bear fruit tomorrow.

This post has been reproducedfrom Devdutt Pattnaik’s blog and republished with the consent of the author.