The Entrepreneurship Cell of IIT Bombay has launched a campaign titled “Iota377” to sensitize college-going youth about the rights and issues of the LGBT community in India. The drive, which is being conducted across 25 colleges in India, attempts to reach out to students and break the myths and prejudices surrounding LGBT individuals and establish an environment more conducive to their well-being.

The E-Cell primarily serves as a platform to foster entrepreneurial spirit in the student community by providing mentoring, funding and networking support. The cell conducts the hugely popular Eureka! B-Plan competition which provides incubation support to multiple start-ups, many of which have gone on to become successful multi-million-dollar enterprises.

Although thus far community outreach has not been a forte for the team members at E-Cell, they decided to go ahead in order to give something back to the larger society, having received constant support from it on all initiatives in the 13 years of their existence. Speaking to Gaylaxy, the team at E-Cell explained that the guiding thought behind the movement was to help create a large-hearted democracy that accepts people with diverse beliefs and orientations as long as they do not subscribe to violence. The visibility of the LGBT community vis-à-vis other minorities in India is still limited. Due to social stigmatization, their rights and concerns seldom find expression in mainstream discourse. With a belief that intolerance is also a form of violence, the campaign seeks to build an inclusive society.

Explaining the logic behind the name ‘Iota377’, the team says that the Greek letter ‘iota’ is used to represent imaginary characters in engineering calculations. Hence the prefix, depicting the unreal character of Section 377 in the contemporary realities of India.

The E-Cell team stresses that IIT Bombay is committed to promoting equity and diversity among all its members and honour the rights of every person by treating everyone with respect, irrespective of their differences. IIT Bombay already has a support group SAATHI active on campus. SAATHI strives to create a positive space for LGBT people by allowing them to discover and come to terms with themselves in a safe, comforting and confidential environment. This has fostered a significant and positive change in the mentality of the community within the campus. The team at E-Cell wishes to see the same positive change replicated at campuses across the country. Being a student organization, E-Cell has significant and sufficient outreach within the youth community – another motivating factor for them to take up this cause.

This campaign will see entrepreneurship workshops being conducted in campuses across Jaipur, Bangalore, Hyderabad, Pune, Mumbai and Coimbatore. The workshops will be followed by awareness sessions on sexuality issues by prominent gay rights activists. The workshops are open and free for all students. Iota377 will conclude with the final entrepreneurship summit at IIT Bombay that also features a panel discussion on building queer-friendly workplaces. SAATHI is helping the cell with its network and resources for the campaign, while the Humsafar Trust would help out with speakers and informative videos. 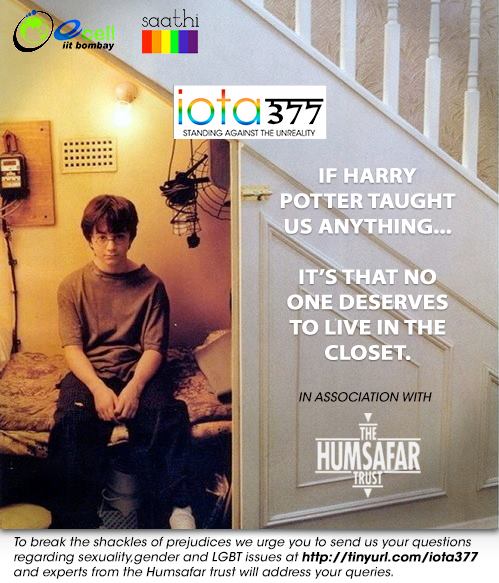