“Talk On Homophobia” Held In Delhi 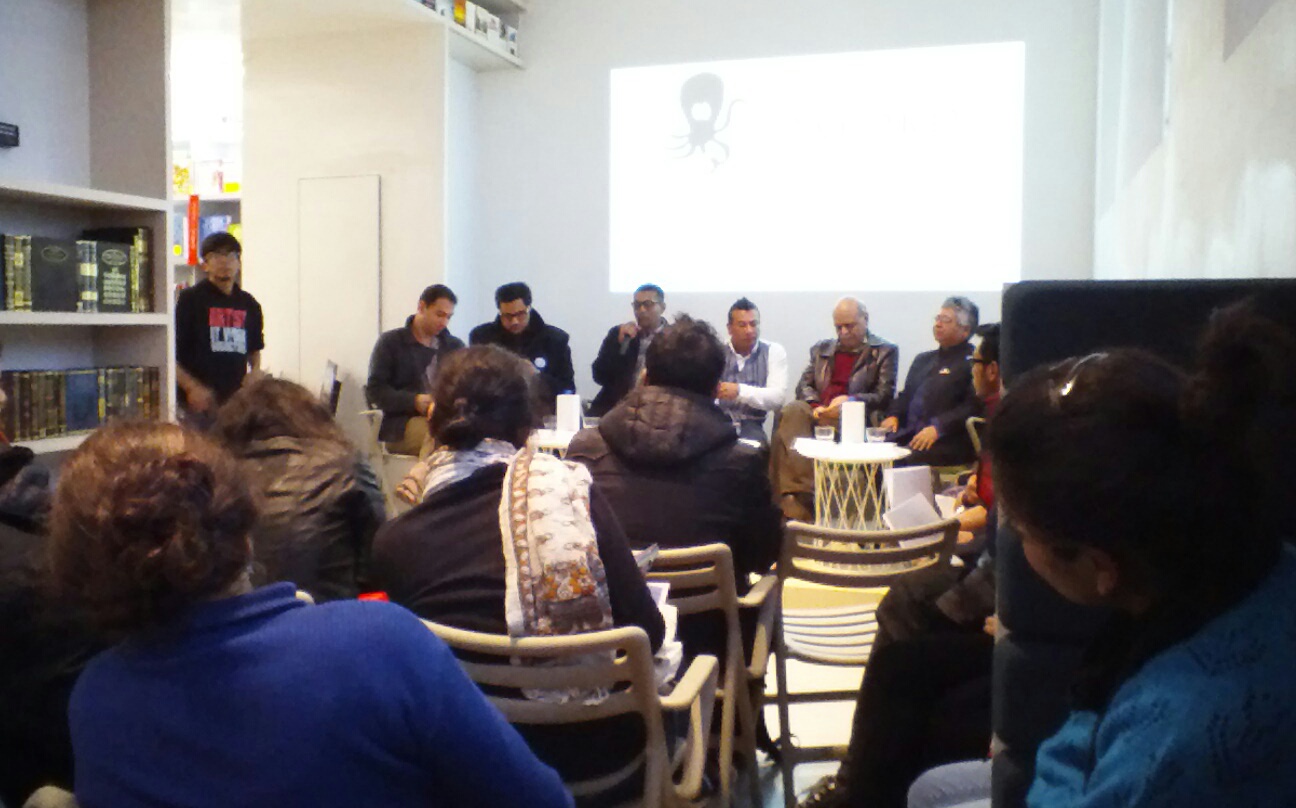 Talk on homophobia: an event in Delhi

The much anticipated “Talk on Homophobia” presented by Artist at Work Productions made a decent show at the Oxford Bookstore, Connaught Place in New Delhi on January 21, 2014. From pamphlets that read “Homophobia is a state of mind”, “Homophobia is not only a result of baseless fears but also of religious sentiments” to musical performances, documentary films, panel discussion and an art exhibition as well made the event a splendid melange.

The release of two short documentary films called Paharganj: Same Love and The Difference by Artist At Work Productions kick started the event (both are available on YouTube now). The main panel were attended by popular names like Saleem Kidwai, Shohini Ghosh, Aditya Bondyopadyay, Dhruv Arora and Kunal Mukherjee. Delhi based trainer and activist, Manak Matiyani who also works on issues of gender and sexuality, moderated the panel discussion.

Saleem, an eminent medieval historian, gay studies scholar, translator and co-editor of the groundbreaking book Same-Sex Love in India: Readings from Literature and History spoke about homophobia that lurks within the queer community itself and the importance of visibility in the larger queer movement. He put forth that homophobia is so strong among the queer community today especially young gay men. He gave the example of how young gay men are disgusted by the presence of older gay men around. He believes it to be homophobia of some sort. He also strongly suggested that visibility in itself is a strength in the larger movement. And the process of coming out/visibility is also a process of fighting homophobia.

Shohini Ghosh, the Zakir Hussain Professor of media at the AJK Mass Communication Research Center, also an essayist on popular culture and a documentary filmmaker discussed homophobia vis-a-vis the medium of film and television. She made a point that homophobia resides strongly in intimate spaces, among people one is close to. She also suggested two ways of understanding homophobia; one as prohibitive which is obviously regressive and also productive if one can realise the subversive potential it it.

Aditya Bondyopadhyay, Delhi based lawyer and activist for the rights of all sexualities since 1993 started off by talking about the problem of defining “unnatural” in 377 and other limitations in it. He also pointed out the absurdity in labelling homosexuality as a “crime” while the perpetrator is never well defined in it. According to him, the legal aspects of 377 definitely has too many loopholes.

Kunal Mukherjee, author of “My Magical Palace” read few excerpts from his debut novel. He focused on the fear and trauma of being recognised as a homosexual in the society. For him its very simple. Humans want “to love and be loved”. His novel is also about this philosophy.

Dhruv Arora, engineer-turned-Activist and Founder of GotStared.At focused on the idea of sexuality and how it is still a taboo. He sees two clear problems in the society. First people do not understand sexuality beyond mere acts of sexual intercourse and second homosexuality is almost equated with sexual intercourse between the same sex per se and hence the complexities and terrains overlooked.

On the whole this one was quite a show in a popular hangout like Oxford Book Store among the sudden spurt of many queer events around the city after the Supreme Court Judgement on December 11.