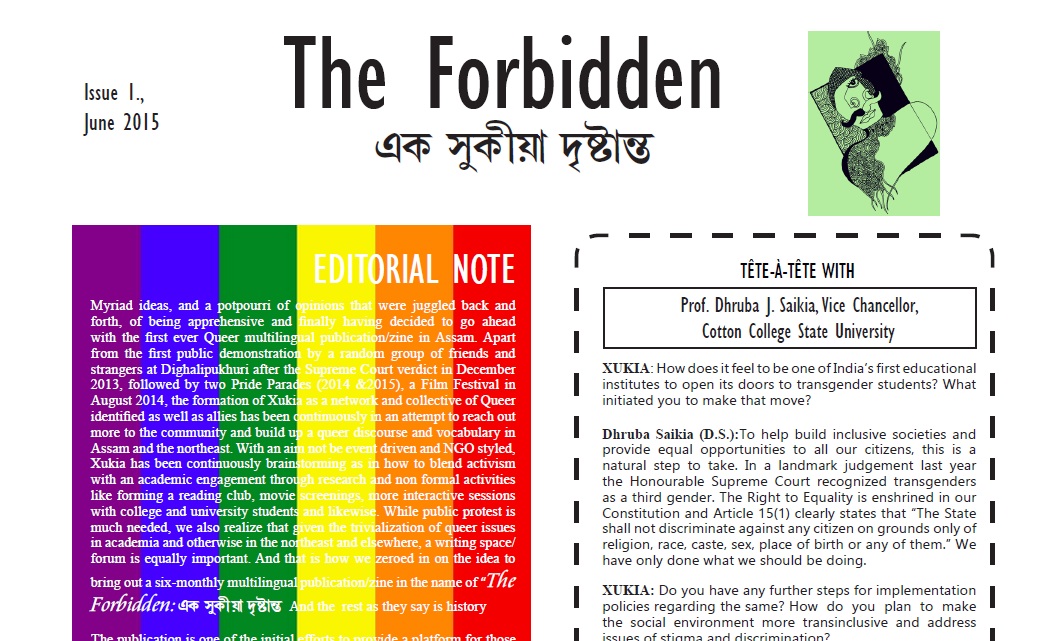 Xukia, a collective and network consisting of queer and feminist individuals in Assam, has launched the first ever multilingual LGBTQI publication in the state. The publication which is named “The Forbidden: ek xukia dristanto”, aims to provide a platform for those voices that get suppressed amidst a prioritization and hierarchy of other issues.

Apart from public demonstrations, followed by two Pride Parades (2014 & 2015), a Film Festival in August 2014, Xukia as a network and collective of Queer identified as well as allies has been continuously striving to reach out more to the community and build up a queer discourse and vocabulary in Assam and the northeast. “While public protest is much needed, Xukia realizes that given the trivialization of queer issues in academia and otherwise in the northeast and elsewhere, a writing space/forum is equally important,” a press release of Xukia stated.

The publication is one of the initial efforts and puts forward a range of articles (academic as well as non-academic), poems, coming out stories, personal accounts, individual quotes and FAQ’s. These pieces traverse from poignant narratives of individuals from and outside the community, fiction writing to extremely radical commentary on the legal apparatus to the trajectory of the movement itself.

“Being the first queer publication in Assam, it was difficult to receive write-up’s, given the apprehension and some level of uncertainty and curiosity. Different writings brought in different ideological standpoints that complement and challenge each other opening up spaces to think, reflect and discuss,” Xukia’s press release said.

The Forbidden: ek xukia dristanto is currently available in the districts of Dibrugarh, Jorhat, Golaghat, Tinsukia, Sibasagar, Dhubri, Barak Valley along with Kamrup Metro. The publication is also available in an e-copy version and can be downloaded from the network’s website.