You know ever since I was a child, I always knew I had a twin-flame or a soul mate somewhere. My late grandma Lily always told me that your soul mate would be the one who would fill and complement what you lack in your persona. She explained the theory of Yin-Yang to me, where the soul mates form the Yin and the Yang individually, and then become one when destiny makes them me 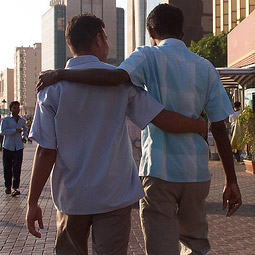 How does this happen

It is believed that twin-souls or soul mates, no matter where they are, would have personal traits which would be the same, experiences and situations or even behaviors and thoughts or actions too would be alike. They both would have faced same experiences in their individual lives, and when you meet him and talk to him for the first time, you would notice more of your own experiences and traits in him. This is how your relationship begins and works. Both the souls would have some variations because of being separated on the physical plane for some time, but when they meet, the two become one. In fact, it is said that the two of them help get each other’s “karma cleared”, and in some cases (sadly) the two of them aren’t even in sync with one another.

It is just as any other relationship; damn the media for making things look so nice. You would find faults with each other’s personalities and habits. It is actually the bonding that was created in a past life which brings the two of you together this time. There is like an instant connection that happens and you don’t have to see the fairies or hear the bells ring. Compassion for him would be the highest at all times, even when they are down the rut. Viewpoints of the other expand with the help of one in the relationship.

Ask yourself these questions

Why ask all these questions?

Not all soul mates are meant to be lovers; some can be best friends too. So if you have found someone like that, just as I have, lucky us. Have fun with your soul mate and I wish you both love and happiness.

This post was written by Rohan Noronha and first appeared in www.desiboys.in.