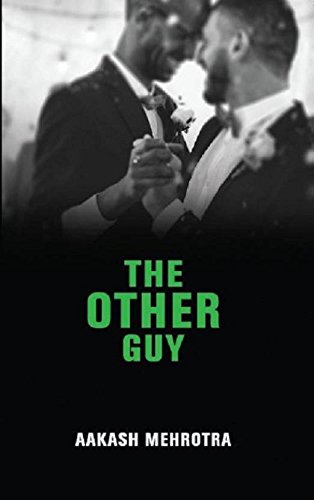 Book Review: THE OTHER GUY – A Novel that Revives Your Faith in True Love

Seldom do you get to read a gay romantic novel that does not end on a tragic note and yet leaves you perplexed to think about the future of Indian gay men in love. ‘The Other Guy’ by Aakash Mehrotra is one such novel that has the potential to be the best seller for dealing with the emotions of two Indian gay men in love with the right balance of drama and facts. It has the elements of a teenage romantic novel sans melodramatic plot. The work of fiction, despite being a light read, puts forth a series of important questions that the ‘society’ at large might find difficult to answer.

As the blurb of the novel describes it as “a tale of forbidden love”, you don’t understand how deep the story between the two lovers is going to be, but as you start sailing through the pages, you realize that the story has grasped every bit of you and won’t let you stop unless you read it in its entirety in one go. Yes, it is engrossing! Especially for people who are not used to reading romantic gay novels set in contemporary India, the story would turn out to be a tale worth reading.

Anuj, the central character of the story is born and brought up in Delhi, falls for his senior in college, Nikhil, a handsome tennis player, who can get any girl of the college with his seductive looks. Being a bit reserved and an introvert, Nikhil does not mingle easily with anyone. Anuj does a lot of home work and observes every movement of Nikhil to impress him and express his love for Nikhil. But, since his past experiences were not good with Harshit, a straight friend of him, Anuj takes time to express his love for Nikhil.

While Aarya the roommate of Anuj finds Anuj as his best confidant and seeks help from Anuj to impress their classmate Dhriti, Anuj does not get the courage to share his story with Aarya. Anuj is confident of his sexual orientation, but he is afraid to disclose it to anyone. He knows the consequences of coming out will be disastrous. Although he never misses the chance to stare at the naked body of Aarya in his boxers, he suppresses his feelings from people around him.

Finally, with due course of time, Anuj dares to tell Nikhil the truth that was not supposed to be told and the game changes dramatically. Nikhil was already in love with Anuj and thus the story begins. Anuj discovers that Nikhil is a confident, well read man who would never leave him no matter what circumstance may arise. While Anuj does not leave an opportunity to show his vulnerabilities to Nikhil, Nikhil respects the decisions of Anuj and support him in all ups and downs of life.

The love story comes to a halt for six months when Nikhil flies to Sierra Leone to do his internship. It comes as a shock to Anuj and soon he goes back to his cocoon. He could sense the appearance of uncertainties around him. But the clouds of tension disappear when Nikhil comes back to Delhi to surprise Anuj on his birthday. With such bitter and sweet incidents, their bond turns stronger until one day when a phone call makes Nikhil tensed and poses a challenge in front of them. You will try hard to know what happened to them in the end and probably a lot amongst us will find ourselves in utter astonishment at the end of the novel. They come up with something so unpredictable that you would not know whether to stand with or oppose them till the last day of your life.

The love making details of the duo is so intense that every time you come across such references, you will miss the most romantic dates of your life. Every single detail of their love making is intense and it also gives you enough scope to take liberty of your imagination. While Nikhil is firm and more intelligent than Anuj, you would find the questions raised by Anuj are all contemporary and crucial. There are times when you might find both of them poles apart, yet you get baffled to see how they complement each other.

While you read this novel, you cannot thank the writer enough to deal with such a sensitive issue with grace and sensibility. Unlike hundreds of romantic novels written for mass consumption, ‘The Other Guy’ poses a challenge to our existing belief system while reassuring our faith in love. The novel leaves a mark on you because of the way it introduces you to the lesser known Delhi, its food trails and facts that many of us, the outsiders do not know much. The novel takes you back to your college days and forces you to recall all the crushes you had and the days you lived as a young gay man.

The only thing that would disappoint you is the way the story comes to an end. I personally found it flimsy and unbelievable. Also, the last chapter of the novel could have been slightly more detailed, especially when the previous chapters were so elaborate. It seems the writer rushed the story rather than allowing it to come to a more organic ending just because he wanted to call it an end.